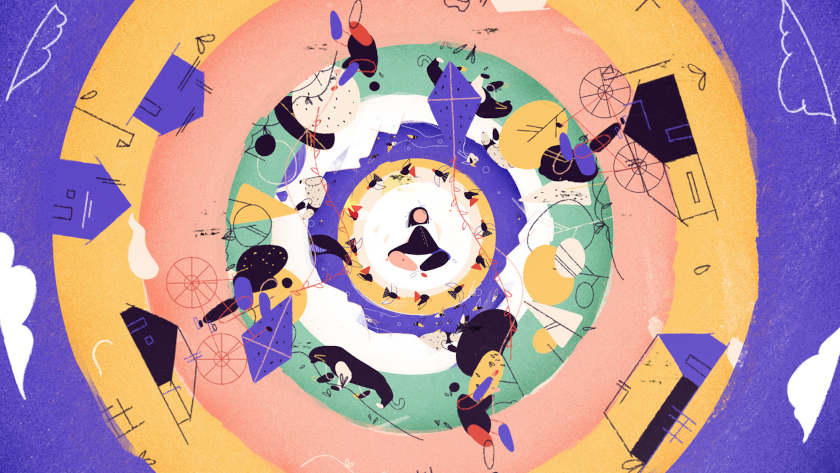 Melanie Fyfe is convinced she is an owl trapped in a human body. As she embarks on a journey of self-discovery, pandemonium erupts throughout the world around her.

This is the premise behind Kingdom Anomalia: The Melanie Fyfe Story by Toronto-based filmmaker Kalainithan Kalaichelvan, who mixes animation and live-action to craft a particular mix of very contemporary social issues.

ZF: Is this an original story or an adaptation? Did you take stock from a news incident, personal /friends' experience?

KK: This is an original story. However the shape of the story comes from a lot of different things - my experience, the experience of people around me, things happening on the news, etc. It’s a lot of pieces coming together before it becomes a complete story.

ZF: How did you work with Mac Wojcik? What was your own brief, and how was the creative flow process between the two of you?

KK: Mac worked from Poland while I was editing the film in Canada. We started with just talking about what the story is. There are three segments in the film that needed animation so we talked through each of them, and tried to figure what style would work best for this. From there he would begin working on illustrations with Ilona Rybak ,and he would send me samples as he went along.

ZF: Is there something in the mockumentary style that you really like and use in this film? Or it was just for Kingdom Animalia?

KK: It was just for this specific film. In fact I always felt hesitant going anywhere near the mockumentary style because of how frequently it’s used by filmmakers. But when I was writing this film I realized the most effective way to tell this story is using some of those elements and hopefully bringing them together in a fun and exciting way.

ZF: Why does the owl Melanie lock itself in a cage after she has her reassignment operation? Shouldn't she be out in the woods?

KK: Well I suppose there’s the biggest element of irony in the film. The people supporting Melanie would highlight the fact that people/animals should be free to live how they want. In her interview, Melanie herself says “we’re all just animals that want to be set free”. She feels trapped in her human body at the beginning, so she chooses to transform into something that felt truer to herself…but ultimately ends up trapped once again, now inside a cage. The one thing I would highlight is that Melanie doesn’t really lock herself in a cage. After the surgery she is an owl, it would have to be the people around her moving her to a zoo. She definitely should be set free and out in the world, but in a society completely enamoured by her story, people aren’t as willing to just let her go. It could be for a couple reasons…people might not think she’d be able to survive out on her own since she’s spent most of her life as a human being…but also, I think it’s a matter of satisfying the public and the profit that comes with that. They keep her in a zoo so hordes of people would come in to see the owl that was once a human. 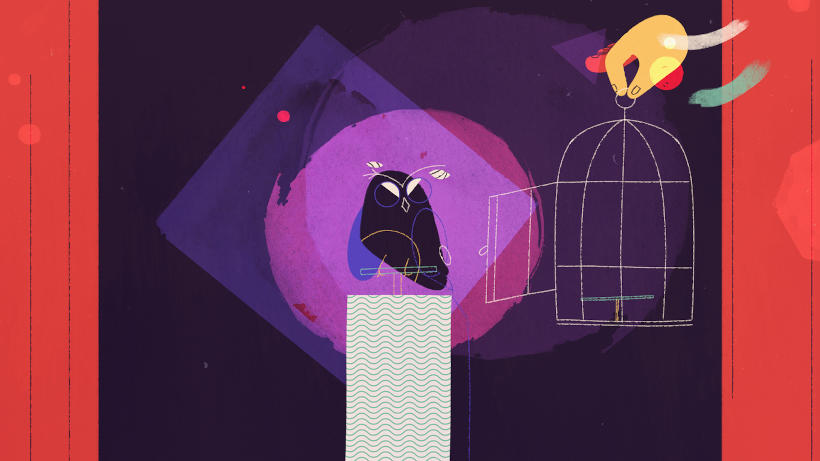 ZF: If Melanie didn't decide to go to a reassignment surgery, but insisted on being identified as an owl, would you have made a different film in the end?

KK: That’s an interesting question. It would definitely change the film and impact the approach to the storytelling. Although the heart of the story and the character would remain the same, the ending and the element of the reassignment surgery is a big reason why the film is structured the way it is. Perhaps in that case I would be more interested in telling the story through the character of Melanie rather than the people around her. But again that would result in a completely different film.

Film Review (Vassilis Kroustallis):
Kingdom Anomalia: The Melanie Fyfe Story is as complex and multi-layered as it looks like at first viewing. Using animation to tell what live-action cannot adequately describe (such as the reassignment operation and the glorified image of Melanie Fyfe as the Savior), it secures different corresponding character designs. A modernist-looking animation part comes across when human rights are discussed and paraded, a glorified imagery accompanies the excessive claims of "Melanie the Chosen One". The film itself moves between and showcases the two extremes: the deniers and the worshipers (for all wrong reasons) of self-determination and self-identification. Melanie herself appears in the film, unadorned and in the bare-bones surroundings of her own room (a single owl photo) to testify. Her words ring true, and so does the film, in its own self-imposed distant way. In a world where identity politics and trans identity is hotly discussed, the latent subtle irony of the mockumentary film with its kaleidoscopic panel of opinions proves to be an energetic, rehearsed, and thought-provoking study on folk identity politics.

About Kalainithan Kalaichelvan:
He is a Toronto based filmmaker. He received critical acclaim for his directorial work on several films such as Inland Freaks (NSI ‘18) and Petit Four, which went on to win the Artist Vodka Film D’Or at the Oxford Film Festival. Kalaichelvan is currently developing several upcoming projects with talented filmmakers under the banner of his production company, Black Caper Films.