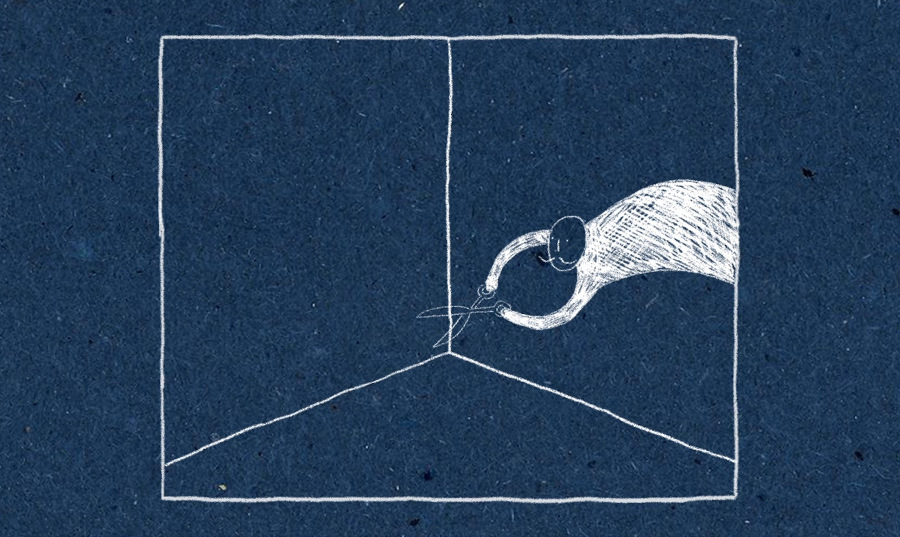 Life is difficult in the corner, in the point where three lines meet. Everything is geometrically relative when laws of perspective and gravity start playing tricks.

Of all the things that could be be said about Corner, the claim that this would be a claustrophobic film would be the most inappropriate. Lucija Mrzljak finds her own ways to embed human forms from all corners to the central, perspectival, seemingly unchangeable framework.

It helps that the night scenery suddenly makes lighting (lamps, flashlights) not  a source of vision, but more a means to literally absorb characters into various uncomfortable (but still playful) positions.

Domestic household duties, such as warming up, can be helpful, but machines are never easy to manage -and chores are always more than a bore. Sea becomes the haven out of the box -for those they are ready to jump off . Or,  alternatively, they can choose to be swept under the office rug.

Corner eloquently (and with gentle brush strokes) narrates the story of people who cannot but be inside the corner -the film accompanied to a succinct sound design temp). Sometimes they are resourceful enough; however, and  whatever their fate, they still play the game.

Lucija Mrzljak was born in Zagreb, and studied at the Academies of Fine Arts in Zagreb, Krakow, Prague and Tallinn. After completing her MA of Animation in Estonia  (student of Priit and Olga Pärn), she got her first professional experience as an animator in Joonisfilm studio. Next to directing animated films, she works as a freelance illustrator for children books and international political magazines (Le Monde Dipomatique, Newsweek.cz, Raketa, Täheke).