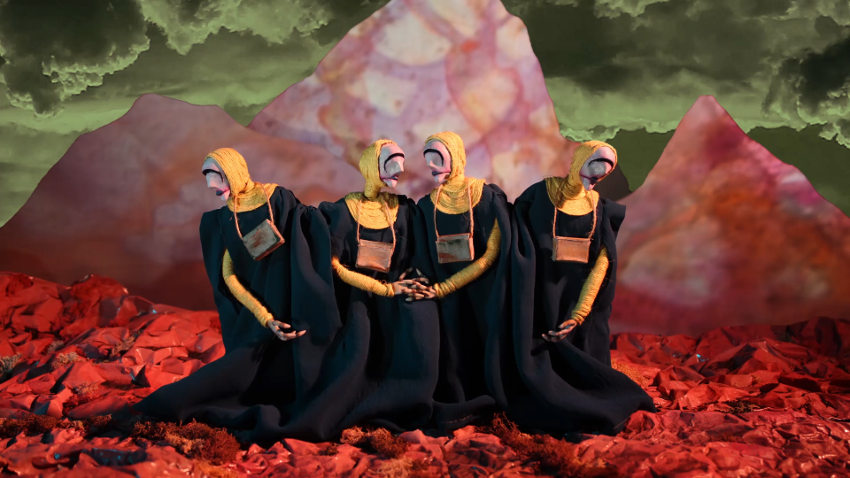 In a poisoned sea, on a forsaken rock, a holy sect seek to bring about a new era, but Morgan quickly discovers their intentions are not wholly pure…

Madder Isle being an ongoing story for UK artist Laura Spark (' there’s so much more to explore with Madder Isle') , it describes in its own way ' the planet as we collectively face the reality of climate crisis'

ZF: It seems obvious that the environmental plight is the topic behind the film, but why did you have to introduce a secret cult?

LS: The nuns represent Man standing apart from nature and assuming dominion over it, as opposed to viewing ourselves as a part of it, or even deferential to it. When I first started to make Madder Isle it was this Anthropocentric view I wanted to challenge.

ZF: Why is your main character a woman?

LS: Women are often aligned with nature and as such are classified as passive and a resource to be dominated by the patriarchy. In the film Morgan reasserts her agency, but she also lives symbiotically with the island, in a relationship of mutual respect, going against the dominant structure.

ZF: Did the story come to you as it is now, all of its scenes?

LS: The story could have been a 3 hour epic film and had to be cut down dramatically! At the beginning of the process there was also dialogue but it all got cut! It all started with the idea of a living island, and the idea of someone staring into a pool which would change form.

ZF: How did you come up with the combination of stop-motion and textures.

LS: I wanted the sets to have an emptiness to them, to feel like something was wrong, that everything was polluted, uninviting. The mountains are oil on acetate on an overhead projector projected and the skies are filmed and digitally manipulated. I was inspired by paintings of abstract landscapes by Kate Shaw using dripped paint, and by turning all my own landscape photographs pink.

ZF:  Did you do everything by yourself?

LS: As this was my RCA grad film there was so much input from tutors and fellow students. Its great to be in a situation where you can talk about your film so much while you’re crafting it, but you also have so many inspiring ideas thrown at you, you can get a little side tracked! Morgan's costumes were made by were made by Victoria Nicolova and my mum helped with the Nuns robes as I am not a keen sewer! 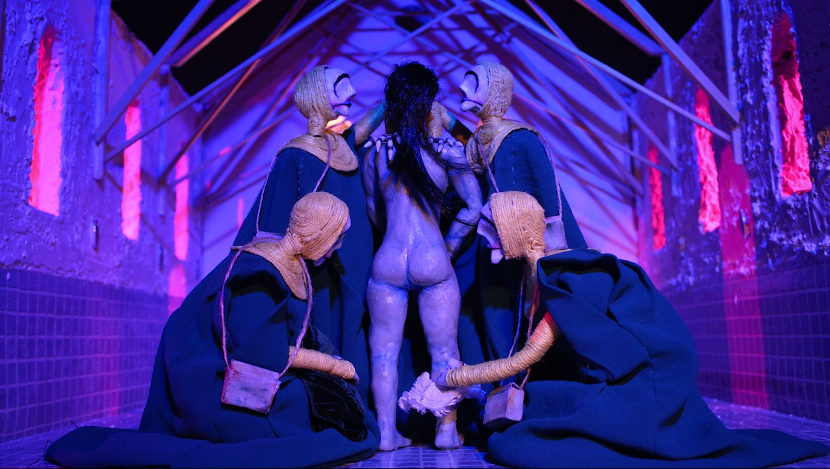 The soundtrack was created by the wonderful Jonathan Hering, and included a chant I had written as a bit of a placeholder, which he managed to weave into a really evocative score. I had a lot help from fellow students with masking out backgrounds as it was something I was only learning to do at the time. Most stop motion I’d done before had been all in camera so it was very new for me to have a digitally composited element.

ZF: Your character really fights in the film, but she seems she has already lost the game from the start, even though she manages to fight her enemies.

LS: She has lost quite a few battles before arriving on the Island. She is definitely in a place of shock and exhaustion and her journey here is more coming to terms with what it might mean to not be the centre of the universe.

ZF:  If I'm not mistaken, madder is a non-poisonous plant, and its root was used to cure diseases. Why did you choose the plant and the title?

LS: Madder is used as a natural Dye to achieve a blood red colour and so I liked the correlation between roots, earth, and blood. Madder-akka is also a Sami goddess aligned with child birth and ancestry, with the the word madder coming from earth, root and ground.

Film Review (Vassilis Kroustallis):
Τhis is a beautifully uninviting and unsettling film taken place in an island with its own heartbeats. Laura Spark uses potent visual imagery and materials that range from the solid to the ethereal to tell a story of connection lost. Including scenes that remain in mind (like the nun's dance) long after the film has ended, Madder Isle gives the audience the sense of an inescapable enclosure: your moving body consists of the same material all other natural elements are comprised of. Cleansing (as the nuns do) only makes things worse and unnatural. The vibes (including the overwhelming chant sound) are strong, but not just part of an ecological horror story. There is inherent lyricism of the process of decay and renewal and rebirth; in the primordial soup where Laura Spark puts her Morgan, resistance may be conquered, but not everything is lost here. An emotion-stirring film.

About Laura Spark
Laura Spark is a visual artist working in stop motion animation, film and audio visual performance.  Drawing on themes from folk, myth, horror and psychedelia, Laura’s insights into contemporary anxieties are haunting and visceral with her background in performance bringing strong theatrical elements to her work. Laura graduated from The Royal College of Art in 2017 with an MA in Animation. In 2018 she was commissioned to create a visual performance, The Untuning of the Sky with Laura Cannell for York Mediale and participated in Flat pack Film Festivals artist development programme, Waveform, funded by Jerwood Arts. In 2019 she was commissioned by Metal to make a film for the Littlewoods Heritage Project, due 2020. Her short films have played in international festivals including Frightfest 2018, and London Short Film Festival 2019 in the UK, to Stoptrik 2017, Slovenia; and Women in Horror 2018, USA.