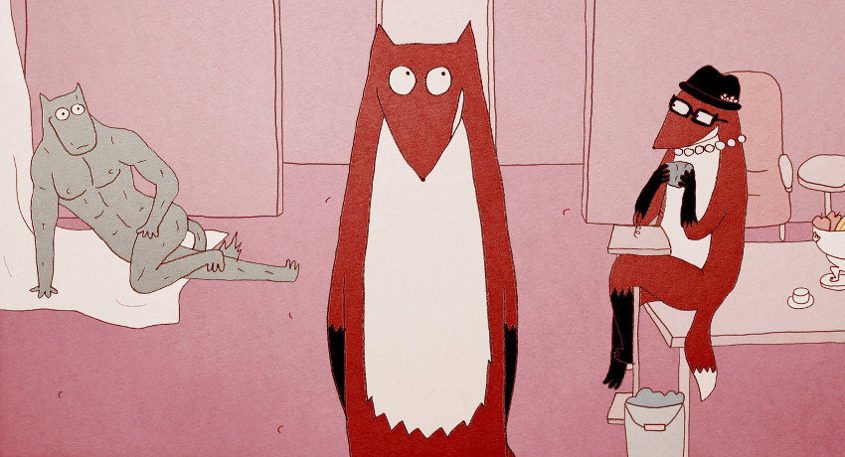 Estonian animation filmmaker Chintis Lundgren (now based in Croatia) reveals her story of a fox which looks a lot like humans who refuse to grow up. Both a continuation and a slightly different story from her equally successful Life With Herman H. Rott, Manivald has the prestige of being more mature-like  (and still confident).

Manivald, a fox, is turning 33. Overeducated, unemployed and generally uninspired, he lives with his overbearing, retired mother and spends his days learning piano while she makes his coffee and washes his socks. It is an easy life, but not a good one. Their unhealthy co-dependence is about to change when the washing machine breaks down and in comes Toomas, a sexy and adventurous wolf repairman, to fix it, and them - Film Synopsis

While going to different festivals with Manivald, I met quite a few mothers who had sons that didn't want to move out. I hope my film gave them some new and interesting ideas about how to solve that problem! But we should also remember it's not easy for the guy who comes to fix things, either. In fact, that's what my newest film (Toomas Beneath the Valley of the Wild Wolves) is all about -Chintis Lundgren.

Manivald is a 33-year-old and an inner child (sorry, fox) in distress. Being at the age that he could actually follow the footsteps of Norman Bates in the celebrated Psycho, he's actually given another, less morbid chance at life. Here love conquers motherly oppression, which is expressed in an endless series of numbered socks (each pair for each Manivald birthday), and an orange/pink-limited color palette: congenial but rigid and inescapable all the same.

Scriptwriters Chintis Lundgren and Draško Ivezić are definitely to be commended for their decision not to present the sexy Toomas (the coveted object  of desire) as a beacon of hope, something that would make for a corny story (a fact they themselves have fun in highlighting in fantasy horse sequences). They rather make the sexual fantasy stereotype of  a plumber  a hopeless object of admiration, freewheeling but full of hypocritical mores all the same. On the other hand, Manivald and his protruded angular face (never a sign of danger, but a mark of distress) needs to navigate beyond his safe place, finding allies and vagabond friends.

Dialogue is sharp and sparkingly absurd, every frame is a confrontation (a must for comedy), and sound design puts you into this irritating 'homely' environment that Manivald finds himself in.

Manivald is more than a sociological comment on millennials and their home-bound (mom and dad) worries. It is an open quest for identity told in precise narrative strokes and consistently bold aesthetic choices which press the issue: what do you want to be free from family harm? Join with your piano a musical sextet, perhaps.