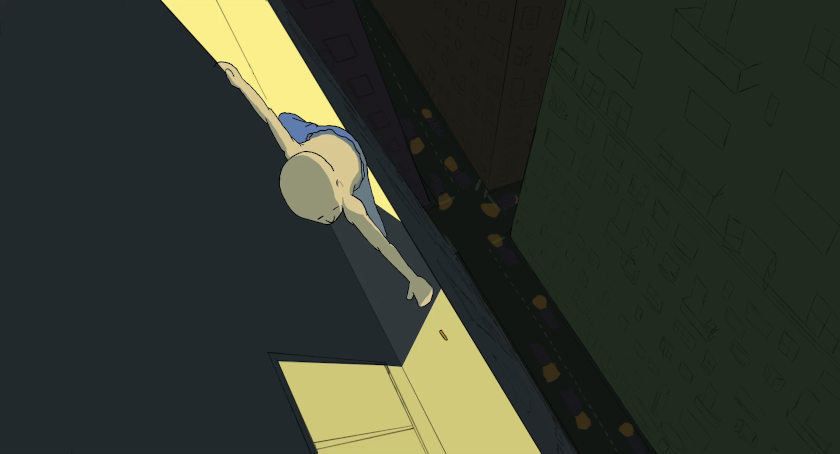 Christian Groen is a 19-year-old animator,  currently studying at Chapman University’s Dodge College of Film. Inspired by a real incident, he made the 2-minute animated Mikey Bobby, a story of addiction and false hopes.

Watch the trailer for Mikey Bobby:


ZF: Is this your student short? And you mention you're doing this with your sound designer.

CG: I am currently attending Chapman University’s Dodge College of Film, and the animation program there has us making a short film our 2nd year. Were supposed to start around November of 2019, however, I didn’t like what I had and completely started from scratch in January. I wanted to do it all by myself, as a sort of test of my skill, however, I knew sound was going to be crucial and it is not something I’m skilled at. Luckily, I had just met Ethan Hammock at a New Years party and ended up getting him to crush the sound design and bring a lot of my dreams to fruition.

ZF: How did you come up with the idea? Were you inspired by a real incident or a personal event?

CG: Funny enough, this is inspired by a real event that I witnessed one groggy morning in Isla Vista, California. I heavily embellished and reworked the story for the film, but I will never forget waking up and seeing this kid balancing outside the window picking through the cigarette butts. It also inspired the title and related character. Mikey Bobby was the first thing I thought of when writing the story, it's related to the kid I saw, and the name just stuck. Some of my friend’s have suggested other titles, but I think Mikey Bobby is what it is supposed to be. The character Mikey Bobby himself is sort of an embodiment of old friends and coming-of-age movies I used to love so much, such as Over The Edge and Palo Alto. A character in such a drab and cynical world ends up with no real goals or ambition and just gets high to pass the time.

ZF: Did you use storyboard, prepared an animatic, and which software did you use?

CG: Initially, I wrote it out as a short story. In fact, one night it came to me while I was in the middle of a conversation with friends, and I ran out the room to my notebook and scribbled it down as fast as I could to keep up with the ideas. From there it was edited a bunch and then storyboarded and animated using the ToonBoom software.

ZF: The film has a very urban atmosphere, looks almost like a film-noir. Was it something you wanted to achieve?

CG: Yeah, it didn’t start out like that at all. It was really my friends Cooper Lichacz and Mark Arditi urging me to experiment with a darker visual tone. I’m glad I listened.

ZF: Did you have to make creative changes during those 5 months in either storytelling or aesthetics? Or your idea went through all along?

CG: Yes, the first pass of storyboards are barely recognizable to what the final product looks like. I went through maybe 3 major story/structure changes, and I was constantly changing and adjusting small parts all the way up until the final week of production. I didn't really even work out my plan for the ending until a week before I finished.

ZF: Would you consider your film to be a film about addiction or the impossibility of getting everything right and perfect? Or perhaps something different?

CG: Addiction is the major theme I focused on, but also the ignorance people can have when pursuing things ultimately detrimental to them. It's something I see a lot in the world around me and in myself, and it always pains me to see. Really though, I don't think it was about much more than a guy just trying to get a cigarette. And the impossibility of getting everything perfect was a lesson I learned in the early stages, and I decided to embrace it in the sketchy and rough style of animation.

Film Review (Vassilis Kroustallis):
Mikey Bobby is strategically placed in a balcony - the border between grounded sanity and a busy street, full of sirens. This arresting film follows a simple idea through to its consequences; its crisp editing secures our character identification, while its geometrical backgrounds settings (and especially its shadows) tells their own story of isolation and unfriendliness. Mikey Bobby tells the story of a person reaching out for both the ordinary and the impossible -and it tells it well.

About Christian Groen:
Born in Sacramento, California not even 20 years ago, 19 year old Christian Groen currently attends Chapman University's Dodge College of Film studying Animation.
Being inspired by the work of Suzan Pitt, Einar Baldvin, and Masaaki Yuasa, Christian wishes to create dynamic and engaging stories that stay true to themselves.