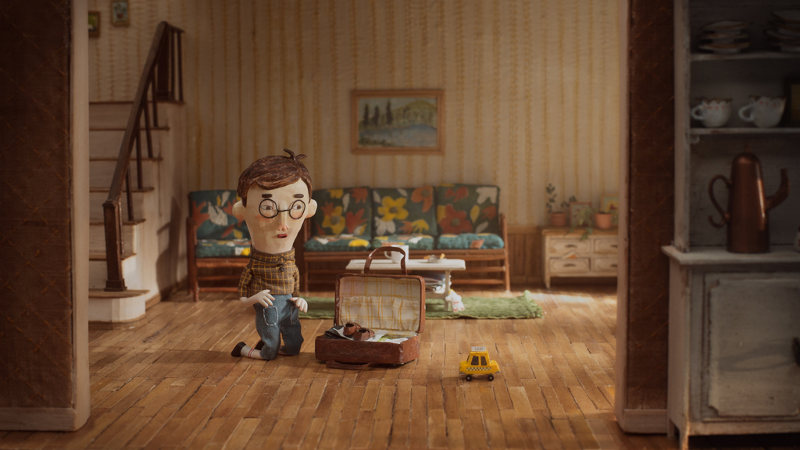 Adapted by a 150-word prose poem by Ron Koertge, the 5-minute puppet film was conceived at a personal-level connection. Ru Kuwahata's airline pilot father traveled often, and one of the most vivid images of her childhood is her father’s packing list pinned to the wall of his study.

Picked up by the up-and-coming IKKI Films (after a successful CICLIC residency), and co-produced by Manuel Cam Studio, Negative Space was realized in a nine-month period. Self-described as professional packers, US directors crafted their own childhood memories into objects and textures on their way to four different locations in  France.

Negative Space ends with a panoramic, bird's eye view shot, a camerawork element that its directors adopt in important parts of the film's screening time. Warm, autumnal colors and clothing alternate with blue wasted spaces, but the message is the same. You need someone to look over your shoulder -when this someone is gone, things get negative from now on.

Without wasting much time on unnecessary explanations (death cause details, the son's profession), Negative Space feels like an illustrated poem with Doric simplicity: re-arrange your things, travel, and then be ready to mourn. The fact that this routine is something you need to face at one time or the other, it only adds to its nature. Negative Space is not about mourning and the father-son relationship in general; it narrates the disruption of a routine bond that took time, effort and a lot of space (here: finding yourself small among a sea of clothing items) to develop. Zippers open up and close memories, tunnels lead to flashbacks, and visible tiny sets portray that a space that can actually connect people is not a given -it has to be created.

Even the funeral sequence and the flashback childhood sequences are full of stuff and people. Half of them you may take with you; but then you need to "put back half", and go on. This is part of the deal in the adept and emotionally well-packed Negative Space.

Here's the Making of video

Max Porter and Ru Kuwahata are a filmmaking duo based in Providence, USA. Collaborating for over a decade as “Tiny Inventions”, they have directed short films, TV commercials, music videos and comics. Produced by Ikki Films and Manuel Cam Studio in France, Negative Space is their fourth professional film.