Α badger lies motionless on a local road. A police patrol approaches the body in the dark. They soon realize that the animal is not dead; the badger is dead drunk! When the police attempt to drag the creature off the road, he wakes up and things take a strange turn.

The film by Slovenian director Špela Čadež, a Slovenian/Croatian co-production (Finta / Bonobostudio)  participated in 100+ festival selections, including Ottawa, Annecy, Animafest Zagreb, Sundance, Clermont-Ferrand, DOK Leipzig. It was the film responsible for Špela Čadež's invitation to the Academy of Motion Pictures Arts and Sciences, and it is a story of alcoholism told from the inside out.

It is the more rewarding that Špela Čadež doesn't care at all about tendencies, but about serving her own story instead. She knows perfectly well that empathy with the character (her badger puppet) is the key element in this case, otherwise a general condemnation of alcoholic behavior would be too moralistic, short-sighted and non-cinematic. That's why the badger not only speaks, but acts: tries to eat and drive, takes his sunglasses, concocts a non-existent interlocutor.

Nighthawk looks like a drunk Nicholas Cage (in character) decided to move along the wonders of Mulholland Drive -but reality and police officers suddenly stepped in and stopped his hallucinatory trip, for his own good. Yes, it is indeed a feast of the eyes to watch the increasingly sparkling and iridescent lights (made in multi-plane camera table, with a lot of effort). 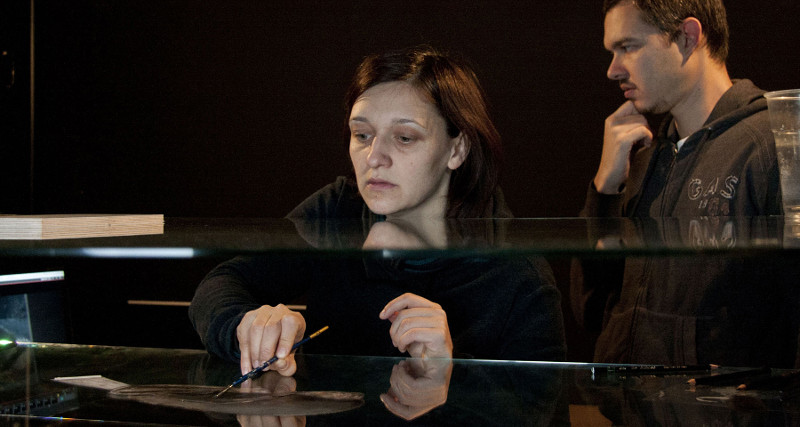 But Nighthawk is primarily an achievement of direction, not just animation. Scene, sets and dialogue lines (along with music) change as quickly -and in unison- as we need them to be, in order to able to appreciate and embody this impressionistic moral tale. Nobody is perfect, and nobody is to be judged for eternity (after all, the badger is spared his own life) -but the interplay between a road trip and a life trip with its own juices it's very strong here. Nighthawk has secured its place as a reference point in independent animation by doing things simple, perfectly timed, and powerful.