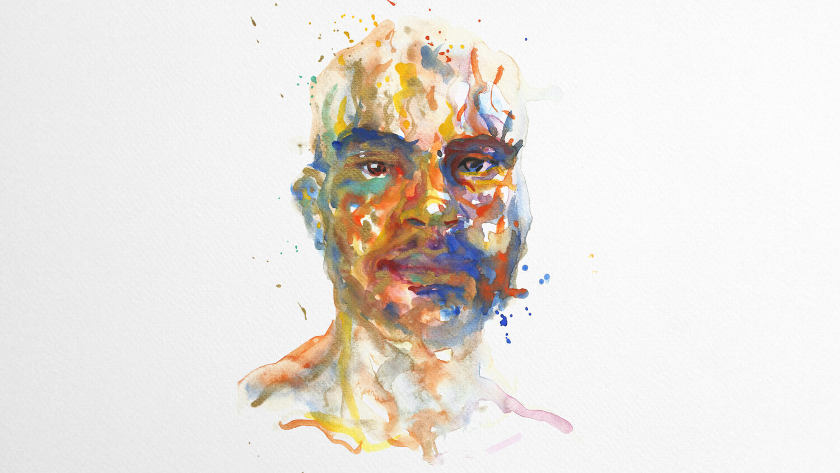 Jay is trapped in the relentless City until he is forced to confront his relationship with Time and himself.

Jay rushes to get ready for another frantic day. Armoured against the sights and sounds of the City, he races against time until a chance encounter propels him into a strange watercolour world. Here, three Nudes reveal their truth and an enigmatic Professor directs time. But will Jay dare to expose himself in order to find the clarity and connection he seeks?

The new animation short Nude Triumphant by Leo Crane (based on A London Model by Roy Joseph Butler) combines painting from life with experimental digital animation. It was produced during the Covid-19 lockdown (Abigail Addison / Animate Projects) with a community of Queer and intersectional life models and artists.

ZF: The inspiration for the film was Roy Joseph Butler's A London Model.  How did you approach as the director the script itself? If I'm right, part of the script was written during the animation stage. How was the creative process between Butler and you? Butler is also the film's main character, Jay.

LC: Nude Triumphant is Roy’s story, a reflection on his personal journey as a life model. He wrote his original blog in 2013 and we had been discussing it ever since. We set up our studio together shortly afterwards and even got married, so it is a deeply personal project. It is also Roy’s first screenplay and - true to our working process - developed in collaboration with our community of artists. As Director, I was involved in this process, working with Roy to interview life models to document their experiences, and supporting Maya Williams and Jo Calderwood as they developed their contributions to Roy’s script.

While I worked with producers Celia Atkin and Abigail Addison on developing the script into a film, Roy produced the associated community events. These events were critical in the film’s development: for example, the character of The Professor was developed through improvisation at the Starkers Academy live events (more on that later) and some of the drawings in the film were made at real world Nude Triumphant workshops.

So it was in no way a traditional script to screen process. It was much more like a documentary, where the story continued to develop as the project unfolded.

Watch the Making of Nude Triumphant

ZF:  Need some context  and background info about the Starkers Academy itself and its function. How it started, its queer character and how much of it you wanted to transfer into the film itself

LC: Nude Triumphant is not just an animated film, but also a programme of live engagement. Our studio Figuration has always been a mix of independent animation and community art events. In 2013, we kicked off with the Starkers Academy, an opportunity for people to try life modelling for the first time. It’s a live event with a paying audience of artists that began on the glitter-strewn stage of London’s infamous drag pub The Glory. We quickly built a community of queer and intersectional people keen to explore identity by presenting themselves for artistic interpretation. We’d already produced 12 editions before we launched Nude Triumphant and created The Professor to add her own brand of camp to the proceedings.

So everything you see in the animation has its real-life counterpart. The only difference is that the Starkers Academy is not a physical building, but a pop-up event. And you’ll be able to experience it for yourself at the Starkers Academy Ball, a theatrical extravaganza featuring all the people in the film! We have our fingers crossed that we’ll be able to present it as part of Brighton Fringe in May 2021, a year after our original plans were stalled due to Covid.

ZF: I admired this controlled anarchy in the film. Was there a lot of improvisation, and how did you assemble your cast and crew -including Jo Calderwood?

LC: I really wanted to make a film that captured the spontaneity of live performance. As we increasingly rely on digital processes, I find there’s a danger of ironing out all those unexpected incidentals that bring the x factor to art. This is why it was so important for us to work with an artist like Jo, who uses improvisation and audience interaction as a core part of her act. We stumbled across her show at the Edinburgh Festival Fringe in 2018 and were just swept away by her outrageous and hilarious take on feminism. She hosted a couple of Starkers Academies as feminist clown Kiki Mellek before we decided to develop a new character specifically for the film. This was The Professor, who came to life through the rigour of Jo’s theatrical training. For the animation, she was painted from life in full makeup and costume, finding her gestures through improvisation.

ZF: Tell us about watercolor painting, and why you think it was important for this film to use. The interaction between painting and animation is always interesting in your films. But here the notion of the body itself is important as well.

LC: Watercolour was a deliberate choice: something colourful that has the controlled anarchy you mentioned earlier. It’s a notoriously difficult medium for precision - the opposite of a clean digital aesthetic. I wanted the images to feel like they were painting themselves, something fluid and irrational like human emotion. It’s also a medium commonly used in life drawing classes, so it seemed appropriate to the subject matter.


ZF: A film which deals with model poses will come to be associated with the traditional animation poses. But I don't think you just copied your animation handbook of poses and put it in the film. How free you and your collaborators were to improvise or learn from life model movements and poses?

LC: When I studied character animation at Bournemouth, I remember being surprised at how theoretical it was. Mocap aside, most of the poses and actions came from text books or the students’ imaginations. Even in the famous Drawn From Life books on life drawing at Disney, there is an emphasis on adapting the figure to suit the principles of animation, rather than relying on the truth of observation. Nude Triumphant includes portraits of real people (the models) and these were my collaborators so I had to start with them. Every model has a unique physical language developed in response to their individual bodies. It could be in the hands, the arch of the back, the thrust of the hips. Without being true to these, it would be a caricature (at best) and not an authentic reflection on real experience.

ZF: How would you conceive the relationship between the artist and their model after making this film? Is the model more exposed than the artist / director?

Nudity is no more than an external skin. In some ways, it’s less exposing because there are fewer choices to be judged by (clothes, voice etc.). In any case, I find it’s much more exposing to reveal the inner you and creativity can be a scarily authentic way to do this. Whether you’re performing, painting, posing, writing, it’s hard not to put your own truth into it. When I paint a subject, I’m seeking to create something that exposes a bit of each of us. I hope we find parity as far as that’s concerned.

ZF: Where do you locate the queer element within the film? Is it something like " ready to be exposed"? Free to elaborate.

LC: Queerness has been an ongoing discussion in Nude Triumphant. Most of the creative team identify as Queer. As Queers, we live in the same city as non-Queers, we run the same rat race, sit in the same parks and maybe go to the same art schools. However, we often find that we view these things thought the lens of our Queer experience, especially when they concern identity and belonging - as in this film. We took the view that a film does not have to be about relationships, sex or gender to be Queer, but can represent this fuller human experience. We are actively seeking out opportunities to present it at Queer festivals after its launch at FilmPride, Brighton’s LGBT film festival. It seems to fit well in this context.

ZF: The film was made during the lockdown period. Would you have made a different film without the lockdown factor or was it business as usual?

LC: As with the Queer lens, Nude Triumphant has been made through a lockdown lens. We didn’t set out to make a lockdown film, but there were some remarkable coincidences: the story centred on a person who was running to keep up with the relentless pace of City, then suddenly, unexpectedly, he was forced to stop, slow down and reflect on his place in the world. Every day, I would walk to my studio through empty streets full of birds. So, when representing the City, I made a place for a bluetit and some ringneck parakeets (both nest outside my studio). As Roy and I revised the script, we found that it was more powerful and relevant to isolate the figures and removed as much dialogue as possible. So the models now appear in their own bubble worlds with no visible audience (contrary to the pre-lockdown script). I also played with the sense of scale, allowing the figures to rise above the City as the world seemed to shrink around us. So it has absorbed the nuances of the intense time in which it was made, even if the story has remained roughly the same.

Time and space (for self-creation) are the two main opponents in Leo Crane's Nude Triumphant. But here is a single story of a person who needs to be exposed to truly be -preferably via watercolours. Watercolor painting movements can here give the lead the frenetic energy of the first part; they can be languid and sensual (in the second Starkers Academy part), or solidify themselves alongside the model as a colored halo and a frame in the film's ending. Crane and Butler make the case that learning to expose yourself is a teaching process (with all kinds of oddball but likable characters), and a painting and an artwork is just a truer reflection of yourself. With a musical score that leads the action, and voice actors that clearly enjoy being the gatekeepers of self-discovery, Nude Triumphant becomes a short, delightful study of letting go and being immersed in; playful and tense, it gets its charm in refusing to put things in a box, and giving us a glimpse of the artistic horizon beyond your ordinary cup of coffee. 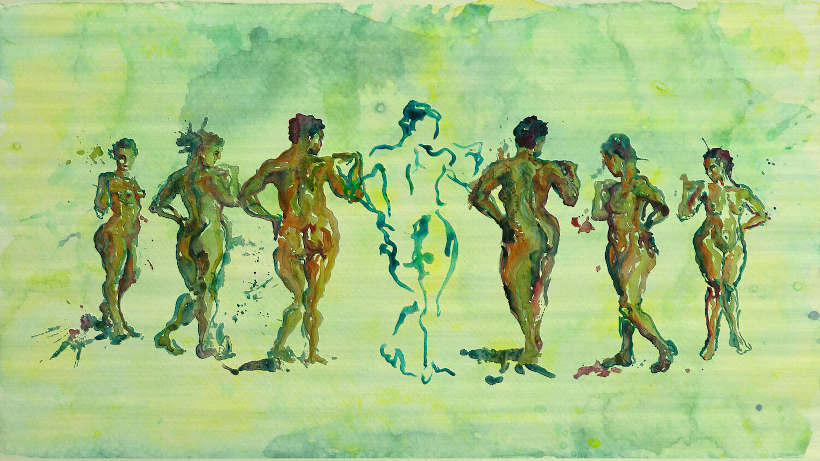 Leo is an animator, painter and co-Founder of creative studio Figuration. His practice is collaborative and interdisciplinary, working in partnership with cultural and community organisations across the UK. He graduated from Bournemouth University with an MA (Distinction) in 3D Computer Animation and studied painting under Maggi Hambling CBE. He is represented by Future Icons.