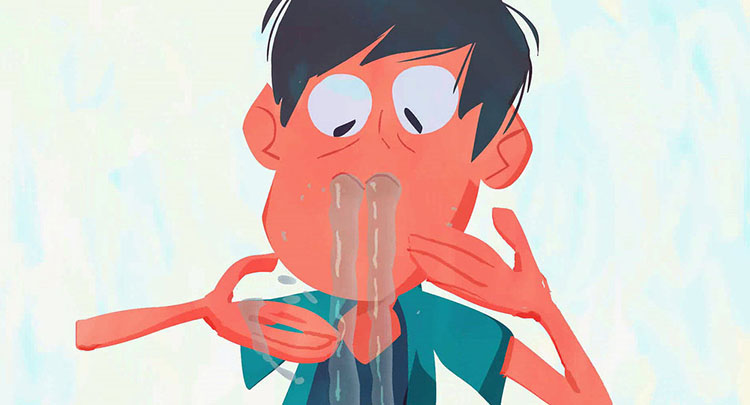 A man suffers from rhinitis in Seoro Oh's (OO). Here's his madcap story.

The happenings of someone's nostrils is the short synopsis of Seoro Oh's (OO) film, which proves that sometimes it's easier in animation to visualize than actually narrate. Coming after his Afternoon Class film, and based on director's similar unpleasant experiences, it investigates what happens during one's outburst of rhinitis.

When the Greek philosopher Heraclitus confessed that "everything flows and nothing remains still" he probably hadn't thought of how swift, extravagant and entertaining (to the others) this change might be.

Seoro Oh's (OO) manages to externalize (in all its possible, colorful, majestic) variations what can be a very annoying condition indeed. More improvisational than his Afternoon Class (but social acceptancetawaits around the corner as well),  (OO) owes a lot to its avalanche of editing decisions. Fire, water and air are all here in their various appearances, while erupting volcanoes compete for attention with overflowing toilet bowls. The excellence of (OO) is that it makes you feel (and not just watch) that everything is indeed possible in a short amount of time - so stop texting now.