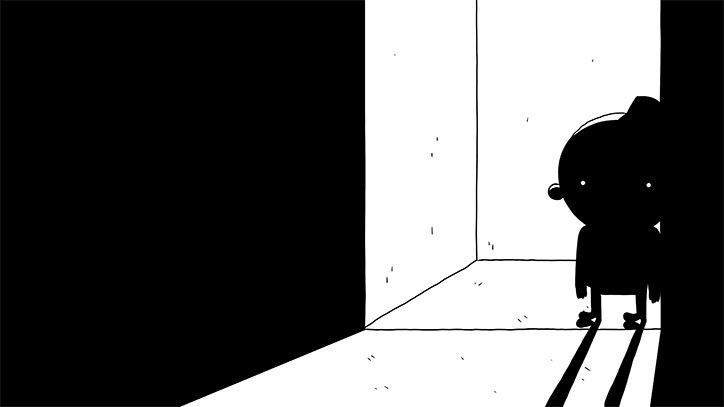 In his everyday life, an elevator boy is confronted with the loneliness and the "up and down" of his service. When he tries to attract the attention of his guests, he makes a very different, gloomy encounter with himself.

Ooze by Killian Vilim was his thesis at Lucerne University of Applied Sciences and Arts  (HSLU),-Design & Kunst/ Animation

The black-and-white framework is already an omen for dark things to appear. 2D animation is neatly constructed in its main character design (round face, protruded nose); however, at the same time, it goes to extremes when it has to face all the other characters interacting with the character. The message is clear: the elevator boy won't simply fit in.

With a perfectly competent and engrossing manipulation of its space (here's wipe transitions for you), Ooze manifestly depicts a life which is supposed to elevate -but simply turns the world into fragmented pieces. The word Ooze may denote a liquid, but here's a more solid (and inescapable) environment for the character -unless he decides to do one last step.

The soundtrack (Raffael Pochanke) makes this effort more comedic, and relieves a little bit of the last act Angst. While not everybody would want  or be advised to follow on the main character's steps, they may still want to empathize with his plights. And Ooze does this unmistakably.