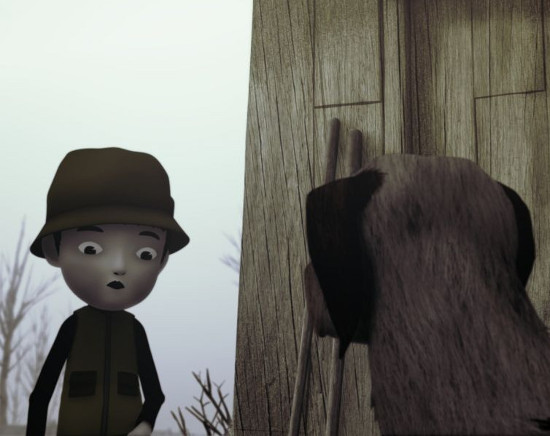 Simon knows about ducks quite well. They make noise, fly, swim, some even roll. Sometimes, it's a bit confusing and Simon gets lost.

The new film by the director of Skhizein won't employ a mental disorder, but still finds itself in the murky atmosphere of childhood. With lips sealed as if being forever oppressed, the central character in Palmipedarium is a boy dreaming of adventures while learning to go hunting with his father - and watching his mother pluck the feathers of dead birds.

The extremely tall and strange-looking bird is an anomaly in the kid's world, saturated with earthly browns and foggy colors. Yet, whatever the boy's good intentions are, he cannot escape his environment and learning -up to the very shocking end.

A masterful film in subdued violence, Palmipedarium tells a lot about not being ready to live with the different other.

Papy3d productions.
Thanks to the BLENDER foundation