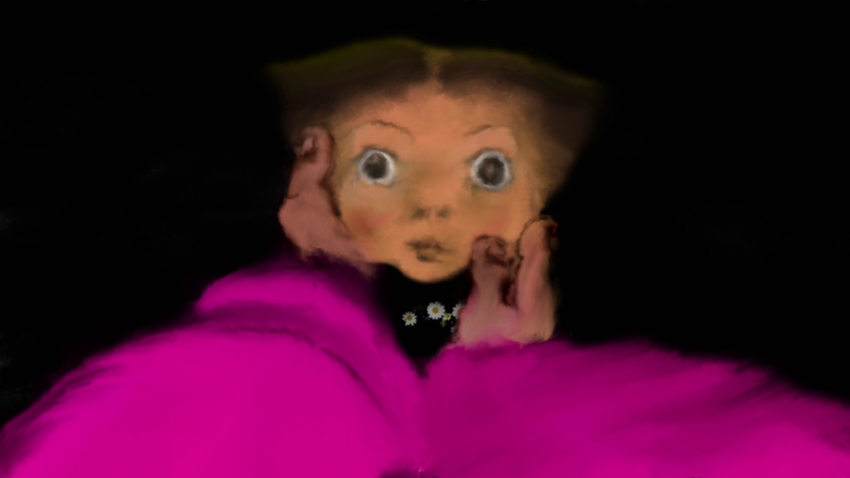 We met her name for the first during her BAFTA win for British Short Animation for Grandad Was A Romantic. In the short by Tehran-born, London-based Maryam Mohajer a child documents the love life of her Grandad – a man who has a reputation for being a passionate romantic (trailer).

In Red Dress. No Straps, Mohajer now tells the story of small girl during the 1980s devastating Iran-Iraq War.

1985. Tehran. Iran-Iraq war. For ‘Marmar’ it is another ordinary afternoon at the grandparents’. The echo of ‘Death to America’ chants from the morning school assembly mixes with ‘The voice of America’; grandad’s favourite radio program. Marmar is waiting for granny to make her a dress exactly the same as the glamorous American Popstar; Bright red. No straps  - Film Synopsis

"This film was very much based on my own memories during Iran-Iraq war" Maryam Mohajer tells Zippy Frames. "The strapless red dress really did exist (I never got one). So did that room at my grandparents and my grandmother made the most beautiful clothes". Her whole idea for the film was a personal one, even though other details were based on different actual people's projected reactions to situations.

"It all started from a sewing machine" Mohajer elaborates. "It's such a fascinating object; the look, rhythm, the sound and the whole nostalgic sense of it. Then during the process the concept of war just found its own way in".

Mohajer's own daughter, Maya Naraghi, plays Marmar, who had to pass a test before getting the role. "I really liked the feeling of her voice in relation to the film" the director notes. "I think she was very relaxed as there were only the two of us in our recording sessions and it was done at home. I would give her a background story, and then ask her to say a part and repeat it a few times. I recorded her laughing when she was laughing in real life at a mistake that she had made. I also got her to run and jump at some point".

One of the scenes that sticks to your head after watching the film is the ear piercing scene, both a coming-of-age rite of passage for young girls and also a little bit terrifying as well. "This scene was scripted alright" Mohajer tells, "yet the character of jewelry shop man was completely different in the original script. He was supposed to be this very clean, small built man with a high pitched voice. The dialogue stayed exactly the same but as I was recording Arash Ashtiani's voice for this character, we improvised. Then this tiny man gradually turned into the horrible, scary creature that you see. It was scary even at the recording session but I loved it!"

The film has a contrasting ambience. The black background and the concept of war gave way to an elusive and radiant aesthetics in the character design. To achieve this, 2D animation (TVPaint) was used in a variety of ways. 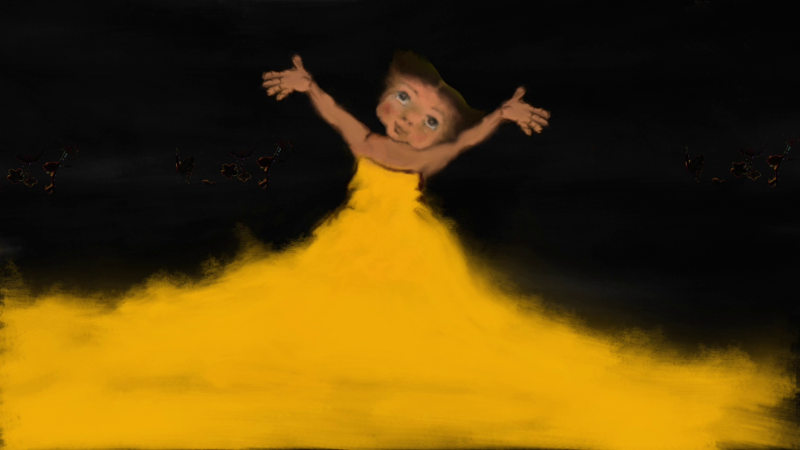 "I used TvPaint and had so many different layers and textures on top of each other. Regarding the head movements, I sometimes rotate (still 2d) the drawing slightly, and then work on it. I've also used collage for the settings in some shots; for example inside the jewelry shop."

Making the film was an extended family and friends affair, apart from Maya Naraghi in the main voice acting role. Even though she directed and animated the film herself, many of Maryam Mohajer friends and family members generously helped with voice acting. "Grandad's voiceover is in fact my father in-law" Maryam says, which in reality he was Maya's grandad, his first and sadly his last acting experience (he passed away in 2019).

But Maryam Mohajer also benefited from a lot of extra support: Tanera Dawkins in the soundtrack ("we've been working together for a long time and she still surprises and impresses me"), Fonic, Barnaby Templer ("always supportive and professional working on my independent low budget films"), Sue Harding ("perfect foley work; it just adds so much to the feeling of my film").

Even though Red Dress. No Straps invests from autobiographical sources, Mohajer is not exclusively bounded by that element. Yet for any future project, she would ask that the prime material in films would be "a good story to tell". Goes without saying.

Film Review (Vassilis Kroustallis):
Little Marmar is dreaming to be the "queen of fairies, rabbits and elephants" in 1985 Iran. She's staying  the whole time at places indistinguishable from each other, yet all look like a bunker anyway. So, she needs to dream and fill in her spare time with colors and shapes. In the piercing Red Dress. No Straps by Maryam Mohajer, the conscientiously flippant narration (amusingly and effortlessly acted by Maya Naraghi) meets the central character mostly at the center of the frame -eyes that move with curiosity, a pear-shaped head that seems can do no wrong. Marmar is not selfish; even though her strapless dress is her first priority, she finds time to describe the radio announcements, and show us the intrinsic contradiction between being national and living abroad in a foreign (even hostile) country. Unlike the heroine in Marjane Satrapi's Persepolis, Marmar has no dreams of becoming a leader; she simply needs a small favor for her thoughts. With a beautifully elusive style of drawing (dresses seem to dance all along as colored pigments, as if  they are ready for their Scarlet O' Hara dance invitation), Red Dress. No Straps delivers its final blow with the utmost simplicity -and nothing else afterwards. It is a precious, vibrant reminder of what it is to be a kid at difficult times  -with or without dress straps.

Maryam Mohajer is a British-Iranian, BAFTA Winning animator-director who was born in Tehran, Iran just before living through revolution, war and immigration. With a background in painting, she discovered animation after moving to UK in year 2000. She got her MA degree in animation from Royal College of Art. Her short films have been screened at many International festivals. She lives and works as an animator, writer, director in London.