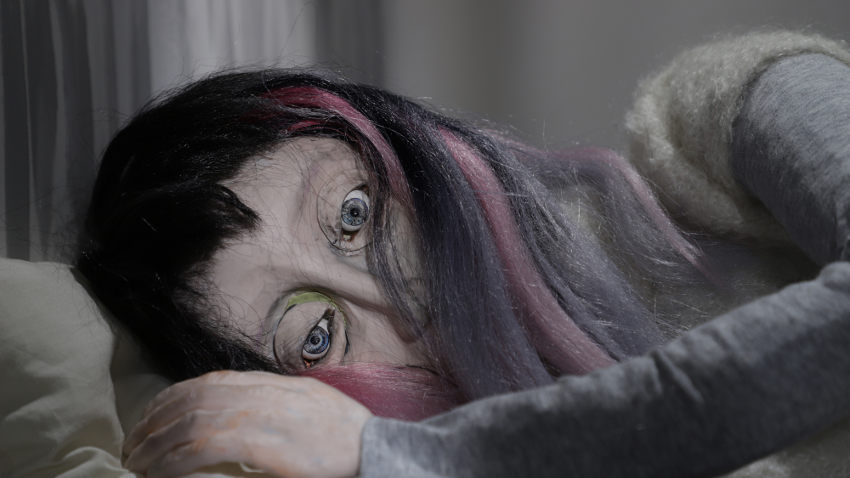 Shadow Passage is Ali Aschman's graduation film for the Animation MA at the Royal College of Art. Stop-motion animation (with puppets of different sizes) was combined with 2D animation, and live-action footage.

The film centers on three versions of the same woman, residing in adjacent rooms. Each room and puppet is identical yet of a different size. The structure of the three rooms is loosely based on a Jungian model of the psyche. Jung described the meeting with the shadow aspect as “a tight passage, a narrow door” which informed the title of the film.

The project took 8 months from conception to completion, and, as the director states, autobiographical elements informed the work.

ZF: What is the time period of the film? There is a old TV set here, for instance.

AA: That's a good question... I don't think I've ever thought about this directly. I think of the story as taking place within my unconscious mind rather than the external world, though of course I exist within a particular timeframe and that influences my choices. My generation is probably the last to have grown up with old CRT televisions, and so the flickering static is reminiscent of my childhood in the 80s and 90s. One of the things that is so beguiling about stop motion is its connection to the Freudian uncanny, with its slipperiness between animate and inanimate, and a subconscious resonance with things familiar from early childhood yet now strange. The trope of analogue TV static as a visual indicator of eeriness and isolation, of 'losing signal', seems to have followed us into the 21st century despite its redundancy in current times.

ZF: Υοu didn't use storyboard or animatic to make the film. Was it a more liberating experience, a piecemeal experience (going from one shot to the other), or sometimes a frustrating experience? Or all of the above?

AA: Working without storyboards or animatic is actually normal for me, though I went through a period in my first year at the RCA of trying to force myself to make them, because I thought that was the "right" way to make a film and that my work would be more successful if I followed those rules. But I really hated doing it, and always ended up abandoning it halfway through. So for Shadow Passage I decided to lean into my intuitive way of working, which is to essentially make things up as I go along, to find the shots and composition that intrigue me once I've got the puppets and sets made and then arrange everything and set the lighting while looking through the camera lens. I wouldn't call it piecemeal, quite the opposite in fact - I found it to be a flowing experience, since I shot everything in the order that it appears in the film and discovered things as I went along that led to the next decision. It was necessary to do that for practical purposes, because I had to partially break down each room after I moved into the next, but also made sense narratively as this was a journey I was on emotionally as a creator as much as for the character in the film. That's not to say the approach didn't have its frustrations and shortcomings though - as I inched closer to the deadline I sometimes found myself rushing through the later shots, that might have been executed differently had I planned it all out beforehand.

ZF: Did you have the idea of live-action footage with the train all along from the beginning?

AA: I knew early on that I wanted to use a projector within the set as a light source and to add a layer of visual content, because I thought it would be fun and also the way it makes an image within an image seemed to lend itself to the idea that although these pictures are on the wall, they are really happening inside her head (in a sense, the room IS her head, in which she is trapped). But I didn't think of the train imagery until much later. I needed a way to focus her attention on the door and compel her to open it, so I was thinking of things that push forward through space, and relate to the theme of 'passage' from the title. Then I had a very vivid dream of someone half-jumping, half-falling in front of a train, and it came together from there.

ZF: How is it to work with puppets at a different scale? What kind of challenges did you face? 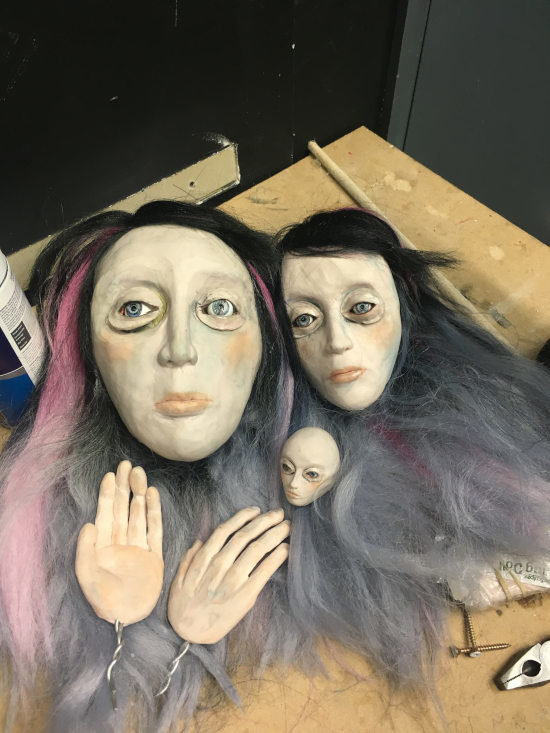 AA: It was difficult but exciting! It was perhaps naive, but I built the larger puppets the same way I would build a small one on the cheap - with aluminium wire for the skeleton, with epoxy putty at the joints and covered in foam, and with faces made from Sculpey which made them relatively heavy. This meant they couldn't support their own weight, and so shots in which they are standing up involved various tactics to support them with wires and string cropped out of frame. Sometimes animating was quite physically strenuous, contorting myself to get in the right spot between all the C-stands and other jerry-rigged bits and pieces clamping things in place, to reach the puppet and also be able to get myself out of frame.

I knew it would be a challenge from the get-go, but it was really important to me to have this sense of scale as the world gets smaller and smaller, as a representation of delving deeper into the psyche. I hope the viewer is able to discern the physical scale of the puppets through the material textures, brush marks, visible screws and so on, so they sense that this is on a scale close to real life, yet also removed from reality through the use of simplified forms and facsimile materials, such as the photocopied floorboards and printed photo of doors. And on some subconscious level to become aware of their own body in relation to the ones on screen. I'm quite interested in the idea of embodied spectatorship and haptic visuality in this sense, that we can 'feel' films in a deeply tactile way rather than just focusing on the looking and thinking. Having made the three puppets in this progression of scale also made my own body into a fourth puppet that is never shown, since I'm about one size up. That wasn't my conscious intent, but it became deeply meaningful to me on a personal level through the length of the production, spending so much time alone with them in a dark basement. 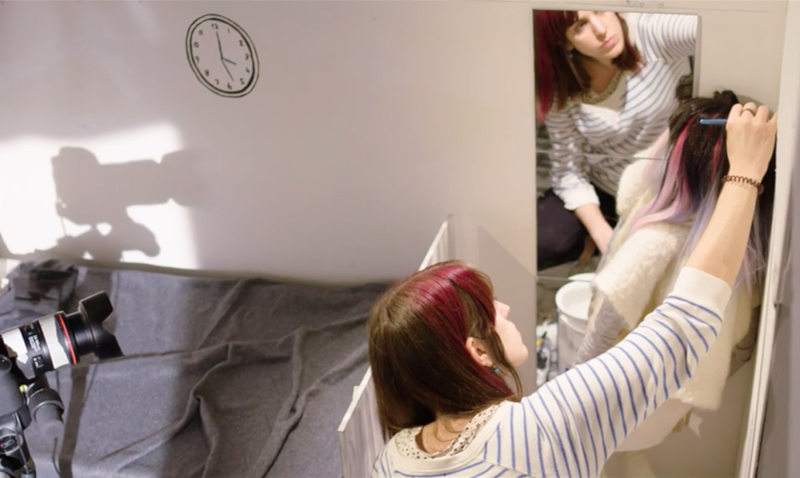 ZF: It is impressive as a directorial choice to interpret Jung's passage about shadows and use puppets instead of 2D animation, which would make shadows easier in a way. Can you comment on that, and also how you would describe the relationship between 2D animation and stop-motion in the film?

AA: If you try to analyse the film based on Jung's theories, it is bound to fail, but it was nevertheless a vital grounding point for conceiving the film. I didn't want to depict the shadow in an illustrative way, since for me it is a much wider concept than anything that could be represented as a character. I wanted to rather use a shadowy, dark atmosphere to frame what unfolds in the film, and create these three rooms, which at one point may have started as a reference to the three major elements of the psyche (the ego, the personal unconscious, the collective unconscious) but by the end of it was something more like the critical aspect, the emotional aspect, and the spiritual aspect. So it's almost like all three of them comprise the shadow, the parts of myself I don't like to acknowledge. And then there's the question of what lies outside the final door. So it's ultimately entirely non-academic but I found psychoanalytic theory to be helpful as a jumping off point for the film and for understanding my own psychology.

Regarding the choice of stop motion over 2D as a primary medium - it's just what I know and love. I have very little experience with 2D animation; I prefer to make and move things physically with my hands. That said, I get bored quickly and like to mix things up, and was intent on using this project as a way to push myself technically and artistically into new territory (such as using colour for the first time in about 5 years). As for the relationship between 2D animation and stop motion within the space of the film, I was inspired by Nathalie Djurberg's films, particularly I'm thinking of one called 'I wasn't meant to play the son' in which clay puppets do horrible things to one another, and although there is no spoken dialogue, at times words appear painted on the walls of the set. There's an ambiguity as to whether these words are meant to come from the characters, or if they are god-like utterances from the filmmaker herself - but are they directed to the characters or the audience? Something that comes up a lot in animation theory is the notion of 'pleasurable confusion', and I wanted to harness that by creating these two-dimensional pictures that appear on the walls within a three dimensional space - so they are clearly separated from concrete objects in some way but its not clear how. Are they her thoughts? Dreams? Are they loaded with individual meaning or simply random? Are they emanating from her or attacking her? My answer is yes to all of it! 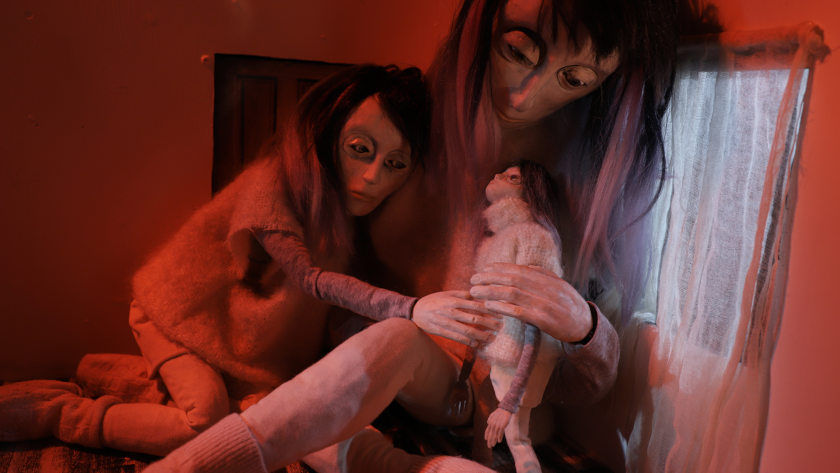 Film Review (Vassilis Kroustallis):
Time is always floating, elusive or simply transient, a part of a train journey in Ali Aschman's intravenously suggestive Shadow Passage. Production challenges seem here to help the work; puppets are not robust human beings, ready to challenge norms. They are instead mostly fragile souls, disheveled, ready to collapse. Enclosed space is always a given in Aschman's work (check also her Body Echo), and here it is modified by its characters' changing dimensions, as if they have themselves to fit in, regardless of the consequences. There are symbols, desires and anxieties in the form of 2D animation drawings, and reminders of a pressing (or even depressing) reality in the live-action footage literally inserted in the room. What puts all these vignettes and characters together is their desire to move and understand, and be joined together -even if they don't really know where they are heading towards. It is a question of well-placed characters who communicate desires and frustrations without the need to speak, but still need to rearrange their space.

Ali Aschman (South African/American, b.1985) is an award-winning filmmaker and artist based in London. making experimental narrative work through the disciplines of drawing, sculpture, installation and animation. Her work explores psychological identity in relation to anxiety and depression through visual metaphor. In the films Body Echo and Shadow Passage, a multiplicity of personas is manifested in adjacent domestic spaces and the figures inhabiting them. Aschman studied Fine Art at the University of Cape Town (BA 2006) and the School of the Art Institute of Chicago (MFA 2014) and Animation at the Royal College of Art (MA 2019). Prior to her relocation to London in 2017, recent exhibitions included Northwestern University, Roots & Culture Contemporary Art Center, Chicago Artists Coalition and Hyde Park Art Center. She has attended several residencies in the US including ACRE, Ragdale, he League Residency at Vyt and Elsewhere. Her short films have screened at film festivals around the world.