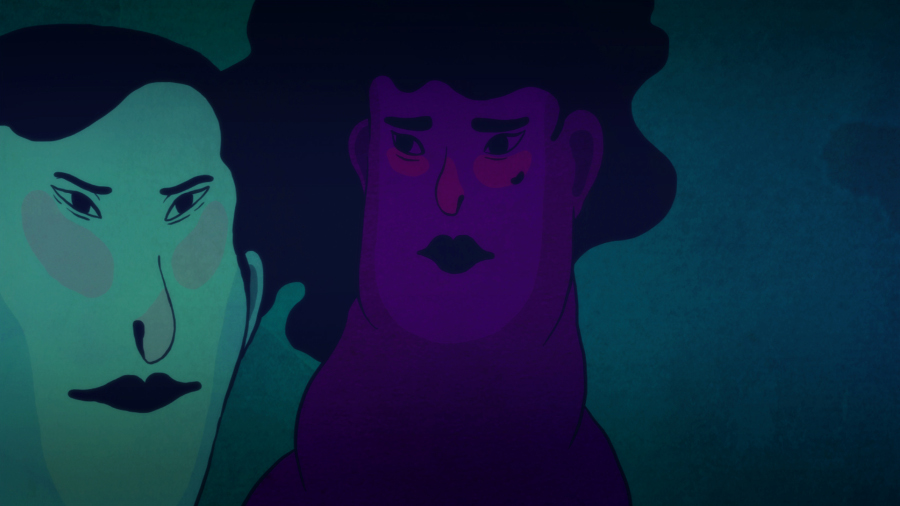 The 15 minutes film tells about the story of the native people of the surrealistic land of Superbia, where men and women form separate societies, face the changes sparked by the first equal couple in their history.

Premiering at 2016 Cannes Critics' Week, the film by Hungarian animation artist Luca Tóth was made in co-production with Fakt Visuál Lab (HU), Maur Film (CZ), Artichoke (SK) and Boddah (HU). In surrealistic land of Superbia, where men and women form separate societies, face the changes sparked by the first equal couple in their history.

Yearning for the perfect unison (and 'yearning' is itself an understatement in Luca Tóth's silent work), Superbia initially presents us with a gender-bending separatist society. Roles are reversed but still fixed: women are Amazons hunting, boxing in caves and using males, whereas 'cultured'  cross-dressing men can paint and knit (and also dig intersex kids in the sand).

The story of the man and woman proceeds like every Romeo and Juliet story in the face of Capulets and Montagues. But what makes Toth's film exceptional is the uneasy feeling that is being created between expectations and reality. At almost all points, one senses that a small degree of extra subversion would do the trick -after all, superbia is not your ordinary-colored society, and saturated colors make the case for immediate actions to follow intense feelings. Nail-biting music (Csaba Kalotás) and sound design tempo (Péter Benjámin Lukács) move towards that direction, even though Superbia settles finally for a genuinely sad conclusion. Giants still look like helpless babies in a bird's eye view shot.

Luca Tóth got her BA diploma in Budapest at the Moholy-Nagy University of Art and Design and then went on to complete a Masters in England. As a graduate of the Animation Department at the Royal College of Art, she created ‘The Age of Curious’ in 2013, which won the Jury Distinction Prize in the Graduation Film category at the Festival international du film d’animation d’Annecy.

Superbia was supported by the Media Patronage Programme of the Hungarian Media Council, the Slovak Audiovisual Fund and the Czech Film Fund. The film received  the audience award at the Turku Animated Film Festival, the George Pal award for most promising Hungarian talent at Primanima, the best Hungarian animation award at Friss Hús Budapest International Short Film Festival, and it was honored by the AFI Fest jury for its visual aesthetics.