The Foundling by Leo Crane 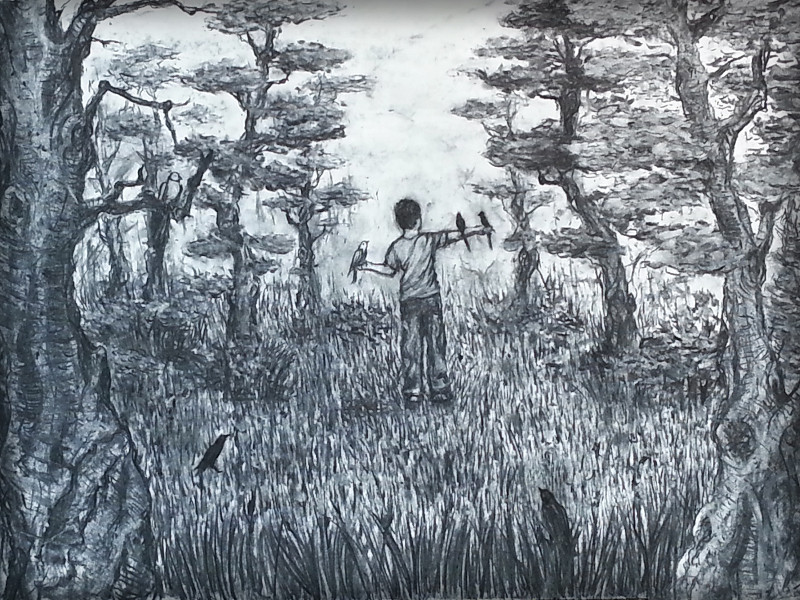 J— dreams of a family where wild birds are his brothers and sisters and he can escape the urban chaos of London. He lives with his adopted dads in a loving home, but can’t forget his past and the violent emotions he feels towards the young mother who abandoned him. In times of anger and sadness, he turns to the piano and the music that allows his dreams to flourish.

Commissioned by Animate Projects and Anim18, Untold Tales projects (producer: Abigail Addison) has sought to engage with animators from a broad range of backgrounds, whose stories contribute voices to the landscape of British animation and to untold stories of life in the UK.

The Foundling was part of this project UK artist and animation director Leo Crane conceived the project together with 9-year-old J-.  After their pitch was selected, they both sat for a couple or more sessions (lasting 5-6 minutes each), as a documentary process where the story revealed itself (just as J- talk on birds and dreams) rather than a prescribed set of questions.

Originally pitched as an LGBT story about a child being brought up with two dads, the film quickly reverted into the main character's personal traumatic territory. But this doesn't imply that Crane's child subject was willing to talk about his trauma.

"As for his early trauma, this is not something he wants to share publicly" Leo Crane tells Zippy Frames. Those with trauma can often be defined by what happened to them in the past or by analysis of the effect this is supposed to have, with the result that their own perspective can be overshadowed".

J- is neither comfortable with being identified publicly ('and it would not be right to do so') Crane adds) Therefore, two directing decisions followed (also taking into account the 60-second film constraints): focus on J-'s highly figurative imagery, and use point-of-view sequences, which underscore J-'s authorship without revealing his face. It is only the final long shot of him standing in the landscape that we see J-, fully immersed in his dream.

J-'s hand figure prominently in the short, but quite eloquent and touchy film. "J- uses his hands to express himself in so many ways" Crane confirms. " Piano playing, caring for small animals, as well as fighting and destroying things". Crane painted directly on paper, using charcoal and a putty rubber; the same drawing was worked up, photographed, erased and redrawn (straight-ahead erasure animation). Every six to eight drawings, the photos were downloaded onto a laptop and sequenced in Adobe After Effects (adding transition frames, when necessary).

"It was more liberating than starting with a 2D software from the start" Crane explains. "I trained in 3D Computer Animation and spent a few years using After Effects for commercial projects. I became increasingly frustrated with the lack of spontaneity that comes from spending so long ironing out mistakes. Whenever there is the chance to 'correct' or undo, I tend to slip into work that is flat and possibly formulaic. This was my first hand-drawn animation and I'm not looking back". 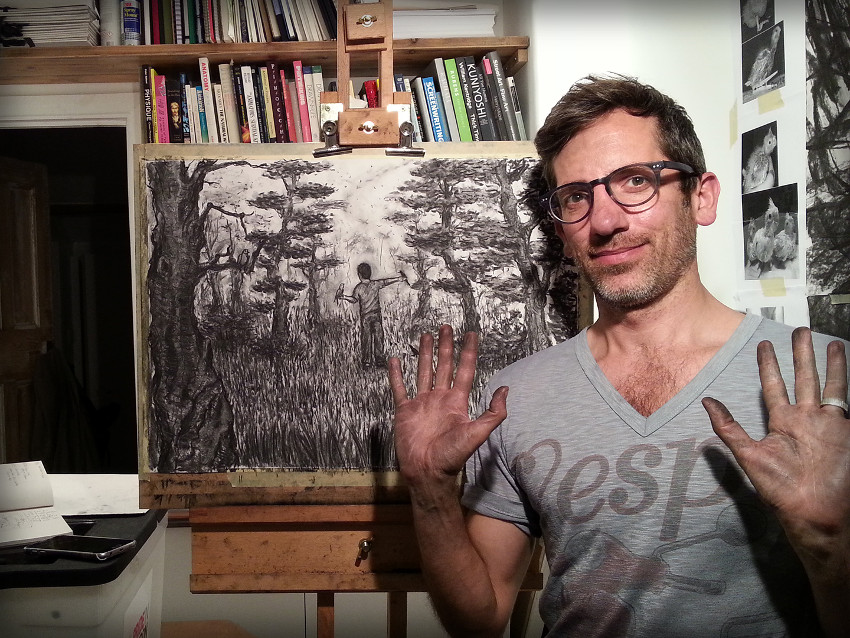 Crane has developed his charcoal drawings over the past couple of years, having already  the guidance of Maggi Hambling. " I love the different marks one stick can make, how quickly I can turn a sheet of paper into a full composition, and how accidental smudges give unexpected character. For animation it's perfect, as it's essentially dust on paper until it is fixed, so you can smudge it or rub it out - but you still keep the ghostly trace that defines erasure animation".

For a project that needed to be completed within 45 days since it was commissioned, It really felt like it took on a life of its own, from original conversations with J- to J- playing the piano, to British Library Sound Archive visits (birds sounds here) to straight-ahead animation. Felt like a dreamy fantasy, The Foundling manages to be still optimistic rather than escapist, and also personal at the same time. J- could still find his way to his forest home.