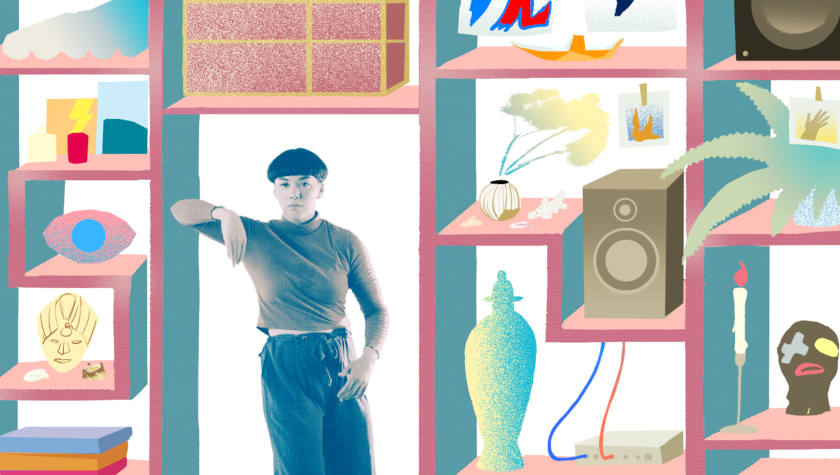 Commissioned by Barbican x The Smalls for their "Inside out" short film series, True Sound Facade is a poetic dance and animation film in which a dancer realises their digital self feels truer than their real world self. It stars Kino McHugh, dancing with and against a colourful animated environment born out of her movements.

Laura Nasir Tamara (find her Witch's Mask here) combines live-action and animation, to show a celebration of how our inner and outer lives merge with each other playfully in the act of artistic creation.

As she herself explains, the film takes its inspiration from the Japanese notions of Honne - literally translated as ‘true sound’, one’s true desires and feelings, and ‘Tatemae’ the ‘façade’, the behaviour one displays in public society. The gap that can exist between both private and public self is here expressed as a meditation and a reconciliation.

ZF: Nature and urban environment interpolate here. You also mentioned "Wood Wide Web" before. Can you tell us how the natural environment scenery and info helped you in making the film?

LNT: In the film, there are two main sorts of elements : abstract, rectangular shapes that constrict. And growing plants that represent creative energy and connection. I think our relationship to the digital world can be both, a tug between connectivity and isolation. In a way, the fact that nature has its own ‘wood wide web’ which mirrors our ‘world wide web’ gave me access to new imagery to represent that tension. As a conclusion, it made sense in the film’s logic that to achieve balance within this world, our dancer would become part flower.  The last scene is also a nod to our commissioner, the Barbican Museum in London, a beautiful brutalist building which houses an unexpected conservatory.

ZF: Would the film have been different if you had a different dancer in front of the camera, and how Kino McHugh helped you structure the piece?

LNT: The piece was written specifically with Kino’s dancing style in mind. Her dance always struck me as particularly narrative. She plays with facial expressions a lot, pays attention to small elements of the music and highlights them with movement, creating elusive moments of acting and story in her dance. I was curious to see what it would look like if we added a layer of animation to her movements. Early on, we talked about her process for creating choreography. She explained she started by ‘creating interesting shapes with her body’, and then seeing how she would move from one shape to another. This struck me as particularly similar to the keyframes and in-betweens in animation, so even if we were working through different mediums it seemed we were speaking the same language after all.

ZF: True Sound Facade is both a commissioned piece and an experimental work at the same time. Was your work structured from the beginning (storyboard etc.) or did you allow a lot of improvisation based on the dance performance?

LNT: There was a degree of structure. We had an animatic, style frames and a shot list, but the film was built very organically. Part of this was due to Covid-related constraints - we only had a very small window to shoot, as we were not in the same country mostly, so we could not plan a choreography. Based on the animatic, I would explain to Kino the sort of space I would imagine her dancing in, and the range of movement she had - and she’d improvise to the music based on that. Thankfully she’s extremely good at projecting. After a first edit, I re-did all the style frames in colour, integrating the live action and tweaking them based on the footage. Some shots were planned early on, for others the animation was improvised based on what felt right to accompany Kino’s movements. Animation and dance are often seen together, but I wanted to explore a wide range of combinations in this film: animation coming out of our dancer, accompanying her movements, animation as cloth and finally her becoming partly animated. 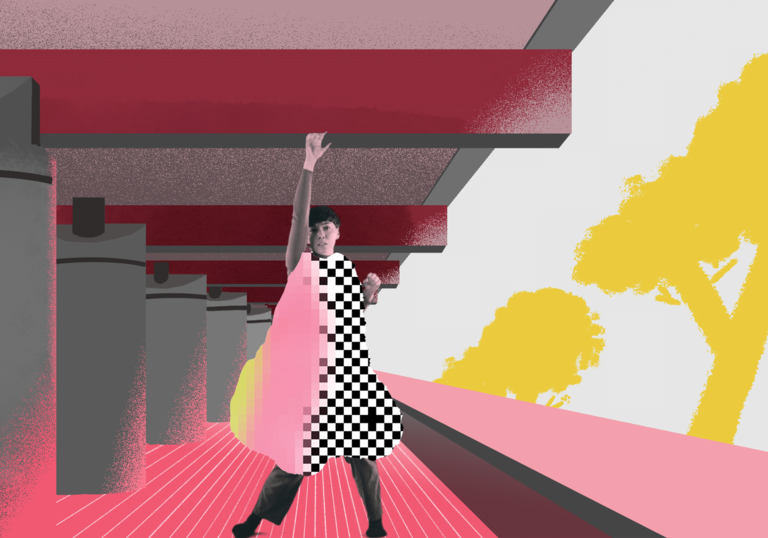 ZF: Did you have the music written before or after animation? And how did you collaborate with your composer?

LNT: We had part of the music written (but not finished) when we were shooting the live action ! We also shot some scenes with other music that accented particular moods, or where the rhythm seemed appropriate for the intention. Then Narae Chung who I have collaborated with many times before (notably on It starts With) finished the music once I had completed the animation.

Film Review (Vassilis Kroustallis):
A pertinent fight takes place between enclosure and freedom, between moving and trying not to be moved in True Sound Façade. Laura Nasir Tamara complements the space around Kino McHugh as a series of possibilities, both beneficial and harmful, to be implemented by the performer. Kino McHugh's performance is both structured and liberated; similarly, the director feels the need to offer glimpses of both urban and natural life (in different geometric viewpoints) in her vibrant animated sequences, where colors and shapes (and sometimes just noise) compete with other as the different branches of a tree which ask for attention. Laura Nasir Tamara finishes her film with an urban orgy of nature, but before that she and Kino McHugh have made us aware of the restless vitality of the human nature in this porous, life-affirming animation short.

Laura Nasir Tamara is an animator / director with a keen interest in both traditional and digital techniques. She blends drawing, painting, and printmaking with digital 2D animation and now live-action. She has worked across short films, music videos, animated documentaries and more, for clients including BBC Documentary, Channel 4 Random Acts, LADbible, Crosswalk Records. Her short films have been screened internationally. She also sometimes works as an illustrator, doing titles on music videos or set design.