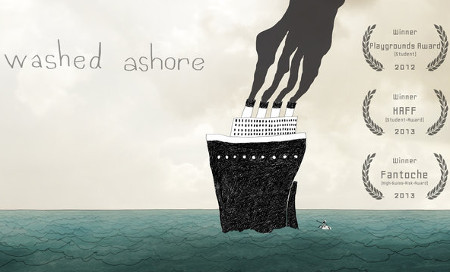 A castaway finds himself washed ashore a beach at the foot of a towering city. His curiosity draws him into the urban expanse he finds before him. Whilst in the city he tries to get in touch with the society. However the characters he meets are strange, superficial and snippy, and after a series of unfortunate events he finds himself a castaway once more.

The power of this quirky, hand-made film lies in the simplicity with which it presents its world full of paradoxes. Isolated characters, carefully drawn to look funny and sad at the same time, need the company of the others, but can only find solidarity away from their normal habitat.

Jonas Ott is an animator and filmmaker working and living in the Netherlands and Switzerland. His work is characterized with equally curious characters acting in an unusual way.