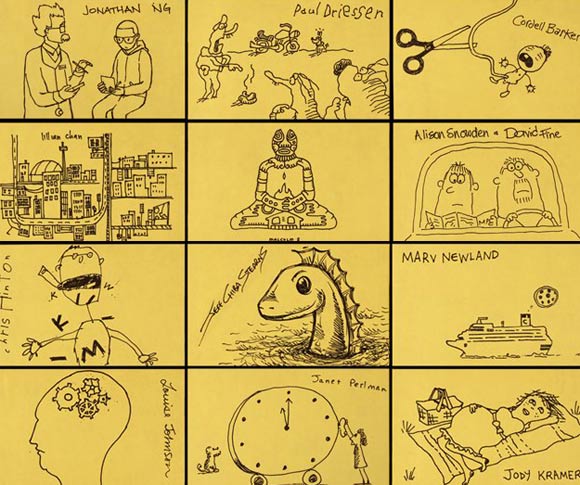 An 'Anijam' is a collaborative animation where various artists create individual short animated segments that are linked together to make one larger film.

After realizing that yellow sticky note "to do" lists were consuming his life, animation filmmaker Jeff Chiba Stearns decided to visually self-reflect on his filmmaking journey by animating on the same sticky notes that caused him to ignore major world events for the last nine years.

For the first time in Canadian history, 15 of Canada's most acclaimed independent animators have come together to create a collaborative animated film, completed in 2012.

Featuring animation from the original Anijam creator Marv Newland along with Oscar® winners Alison Snowden and David Fine and Academy Award® nominees Cordell Barker, Janet Perlman, Chris Hinton, and Paul Driessen. To create the film, the animators were asked to self-reflect through animation on personal and global events that impacted one day of their lives.

Animation meditation is blended with image, text, and an original musical score by Genevieve Vincent through the creation of a classically animated experimental film that was drawn straight ahead with only a black ink pen on over 2300 yellow sticky notes., which has won 10 international awards.