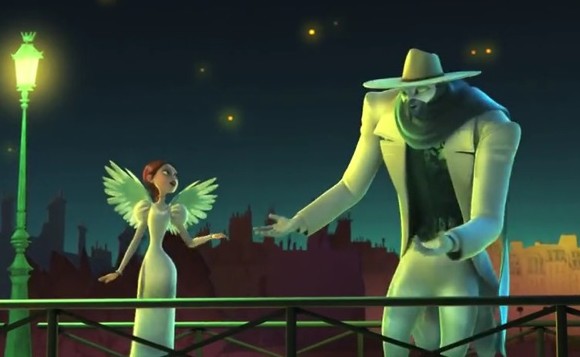 How can you serve both Hugo and Midnight in Paris at the same time? A monster in Paris (Un monstre à Paris), the new animated feature by Bibo Bergeron (Shark Tale), and produced by Luc Besson's Europa Corp. offers a tantalisingly radiant (but not corny) view of Paris, while ignoring at the same time its character life and development.

A Monster in Paris narrates the story of two friends, the cinema projectionist Emile (Sébastien Desjours) and the Jack-of-all-trades Raoul (Gad Elmaleh). The latter happens to have a connection with the cabaret singer Lucille (Vanessa Paradis). When both friends, through their night visit to a scientist's lab, inadvertently mix potions and substances, an ET-faced monster (M) is created -and immortalized on camera.

The chief police inspector (François Cluzet) finds this a brilliant opportunity to showcase himself as the city's savior, and announces a hunting for the monster. Yet, as the old morale goes, the real monster is the inspector himself. This is something that Lucille will remind him in the film's action-packed Eiffel scene (which is less thrilling, though, than its Notre Dame equivalent in A Cat in Paris).

The complicated plot shows that A Monster in Paris is not a love story between Lucille and the monster, despite trailer expectations (and Beauty and the Beast intonations) to the contrary.

This visually opulent film is more a paean to the Paris of the 1910s, a city who was the center for all impressive attractions (cinema included), and defied commonsense reasoning and moralizing.

In this Paris, all outcasts (also counting the main characters and the  monster himself) are welcome -provided they can sing a little bit.

'Attraction' is a useful term to describe the monochrome but constantly changing Paris backgrounds.  Other unmissable attractions take place during the roller-coaster scenes inside Raoul's beloved truck, Catherine.

A Monster in Paris can praise itself for its rapidity, change of scenery and multi-level cultural comment (the topic of clothing as deceitful appearance comes again and again in a city in which haute couture rules). Yet, the main impediment in the cinematic entertainment is the monster himself.

It has to be said, the monster can only sing, not talk -and the duet singing scenes between the monster and Lucille bring a feeling of genuine warmth. Yet the monster here is only the narrative excuse to bring home a never fulfilled love affair between Lucille and Raoul. Even these characters are as predictable in their outcast costumes as a monster would be.

The aspiring filmmaker Emile would be a better choice for the lead character, yet his part is to subserve the main Paris love story (the coda between young Lucille and Raoul adds nothing to the film).

A Monster in Paris is enjoyable, vibrant and its action sequences will grab childrens' attention. Yet it seems curiously withdrawn from its subject-matter: how to be an outcast in a city that cannot stand one-note characters.