With films in its slate like SAM's POS ESO and a tribute to French animation (My Mommy is in America and she met Buffalo Bill, Day of the Crows),  Animasyros 8.0, which takes place between 24 and 27 September, moves closer than ever to European animation. Its feature competitive programme (audience award) balances between the happy with a cause and the urban drama: Little from the Fish Shop, the Czech revival of Andersen's classic tale is a fine example of the latter.

Ari Folman's visit is destined to become one of the festival highlights, in which the Oscar-nominated Israeli director revisits some of his old works and presents new clips from the upcoming Diary of Anne Frank. 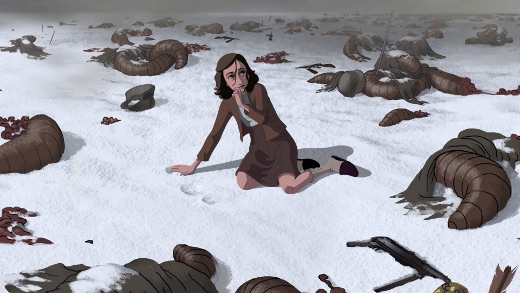 Agora is the new professional forum of Animasyros, with networking events and presentations such as Aliki  Theofilopoulos (Alice in Wonderland),  Dan Richards (A recipe for making stop- motion), Anna Eustathioiu, European Committee in Greece member (Europe is beside you), and Mirna Keshishian

Ds Johann Strauss's opera Die Fledermaus from the Greek National Opera and directed by Alexandros Eukleidis and Greek expatriate animator Irini Viannelli is only one of the highlights of this interaction between animation and music (Friday, 25 Sep). Poetry in motion and Dance are thematic tributes that also highlight ways of communicating with each other through various artforms.

Greek animator Aristarchos Papadaniel presents his awarded, based on the Games of Thrones HBO series, The Rains of Castamere film (and sings as well).

Christina Depian and Ioanna Giakoumatou prepare an animation workshop for general and special education teachers, and people with disabilities, the latter being a running theme for Animasyros 8.0. All festival events at www.animasyros.gr