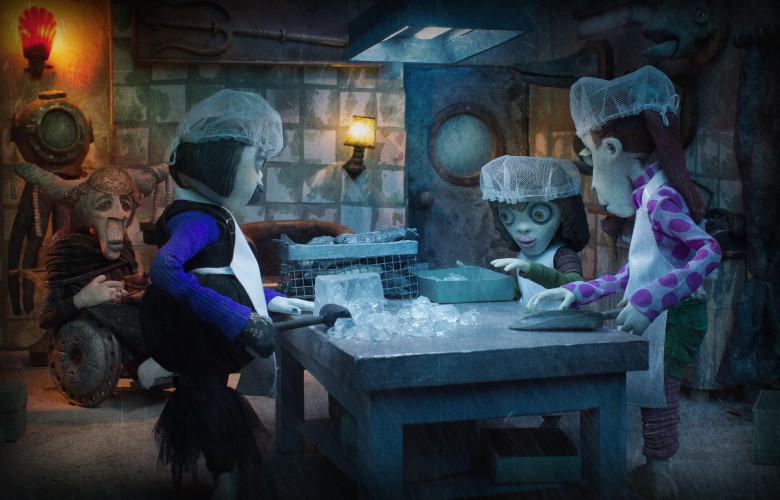 It is no news that a puppet animated feature from the Czech Republic hits the festival (and hopefully, the theatre) stratosphere. The only question is why it took it so long.

Closer to Hans Christian Andersen's story than the Disney 1989 musical extravaganza The Little Mermaid, Little from the Fish Shop  is the brainchild of the  Czech artist and animator Jan Balej, who directs and co-writes the script (along with Ivan Arsenjev) of the 75-minute animated feature.

Little is the smallest daughter of the frog-faced Sea King, who and his family were forced to abandon the plundered waters of their home. The Sea King has now open a Fish Shop in the harbor, home of many nationalities, wonders and dangers, and he lives in the back of the shop with his three daughters (Little, the always grinning Middle and skin-deep Eldest),  and his old, witch-like mother.

We do expect that Little (who's entering 16, the age of liberty and the opportunity of leaving away from her doorstep) will fall in love with a beautiful stranger; Little will ask a certain witch for her human legs in exchange of something important. This is all in Andersen's book.

The urban variation that c offers is  that the 'beautiful stranger' is a remnant of James Dean matinee idol, full of charm, but empty of a human heart. Little has her triangular face made into the shape of a heart, which she will willingly give to J.J., but to no avail. Although she will not save him, she will soon face the same kind of fate that all J.J.'s conquests have endured.

Do not let the above summary misguide you: Little from the Fish Shop is not a powerful drama of characters, and it is true that Little's character, her warmness and intentions and even her own design (in contrast to the grotesque design of her isters and family) could have been developed much better and efficient in the film.

Where the film succeeds is in taking a distanced view of the outcast world that Little experiences. Chinese merchants, African prostitutes and a superb production design (not digital) of a harbor that never faces the light of the day gives the film its distinctive feel of resignation from life.

Little is less of a mermaid and more of an Alice in the Wonderland, who needs to experience creatures and situations strange to her, not that bizarre, but uncanny enough to remind spectators of Lewis Carroll's story (A beautiful homage to the caterpillar incident in the witch scene).

The narrator's distanced voice (distracting the main plot sometimes) is there to warn that a sad story is about to take place: if the film lacks suspense, it more than compensates with its careful menagerie of characters, places and situation of a "pulsating, blinking life" that can only lead to mechanical sex dolls.

With 73 puppets used in the making of the film, and a musical score that moves flawlessly from classical to electronic by Chapelier Fou (and a musical orchestra that opens and closes the film), Little from the Fish Shop is to be admired for its boldness to transform a classic tale of a lost love into a tale of multicultural resignation.

Definitely not for kids (snorting heroine is one of the film's adult takes), the story of Little is a welcome ensemble of outcasts who are doomed from the beginning to the end, but still are able to evoke pathos.