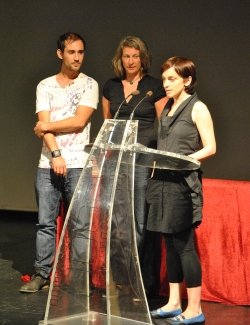 A film from Spain (puppets) was the big winner of the Animasyros festival in Greece.

Special jury mention to the Greek Nomint for the The holy chicken of life and music (2' 35'', digital animation). Holy Chicken is a magnificent beast, worshipped and exploited, in a tale of love and regret, art and science. Its non-linear narration of a very interesting idea was the rationale behind  its award.

Animasyros 3.0 comprised not only  the competitive program, but also workshops (from Dan Richards of Canterbury Anifest), educational events, such as the "Red Sign" workshop for kids (programmed by A. Dimitra, A. Tsikou & H. Depian), and a making of by Konstantinos Tiligadis (Ionian University, Greece) and his team