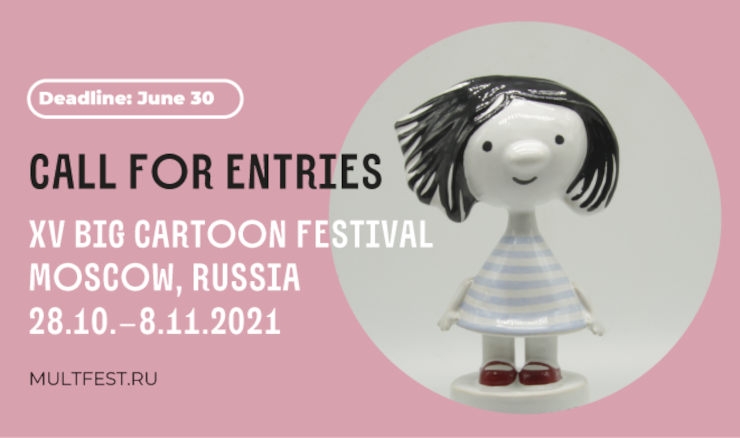 The Big Cartoon Festival (BCF) — the largest international animation film festival in Russia — will take place in Moscow for the 15th time from October 28 to November 8, 2021. The Festival is planned to be held in the traditional in-person format; however, if necessary, the Festival team will be ready to transfer some of the events or all festival sessions to a dedicated online platform.

(Archive) 2021 Call for Entries
In 2021, the Big Cartoon Festival will include competition programs for the second time. In addition to independent short films from Russia and countries around the world, the Festival juries will separately evaluate episodes of animated series and films for children. Three juries will work at the next edition of the Festival: the first jury will judge the international competition, the second one — the Russian competition, while the tasks of the third jury will include choosing the best episode of a series and the best children’s cartoon from the international competition.

For many years we had remained an out-of-competition festival, and only last year for the first time we put together an official competition program with an international jury on the BCF platform. It was a very encouraging experience that allowed us to see and to show to our viewers very new and very different films, part of which had not had an extended festival history behind them. This year we are expanding the competition  program to include children’s films and series, as well as adding a separate prize for non-narrative films - Maria Tereschenko, BFC Program Director:

Based on the results of the work of the juries, the following prizes will be awarded at the Festival’s closing ceremony:

In addition, journalists and critics working at the Festival will award the Critics Choice Award, and the BCF Management will give out their own prize. And, of course, the Festival cannot do without the Audience Choice Award, one of the main awards for our festival and one highly valued by the directors.

The festival accepts films from 1 to 30 minutes. All films must not have participated in the previous editions of the Festival. All films must have been completed after January 1, 2020.

The results of the selection will be announced no later than August 10 (for international competitions) and August 24 (for the Russian competition). The full program of the BCF-2021 will appear on the Festival’s official website at the end of September 2021.
Program Directors of the Big Cartoon Festival are Dina Goder and Maria Tereschenko.
Strategic Partner of the Festival is the Mikhail Prokhorov Foundation.
The Festival is held with the support from the Ministry of Culture of the Russian Federation..