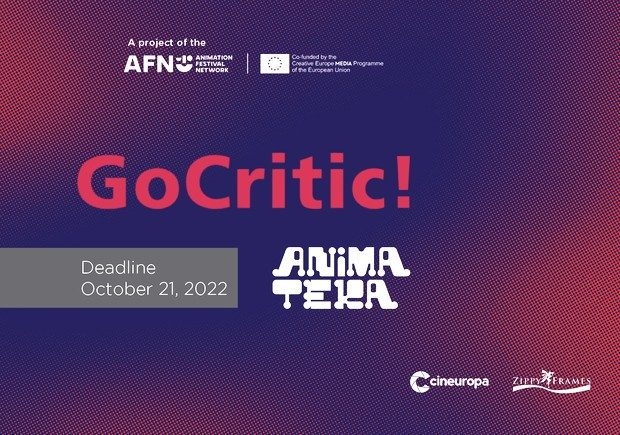 [email protected] is a training programme for emerging European film journalists and critics, organised by AFN - Animation Festival Network in partnership with Cineuropa and Zippy Frames and co-financed by the Creative Europe MEDIA Programme of the European Union

GoCritic! aims to train a new generation of authors writing about cinema on an international level. The main objective is to improve their skills of writing about cinema through practical work in producing such content.  A selection of the participants' articles will be published on Cineuropa and Zippy Frames and disseminated on the Animateka webpage as well.

The workshop sessions will be conducted in English by acclaimed film journalist, critic and curator Michael Pattison and take place during the Animateka International Animated Film Festival in Ljubljana, Slovenia, from 28 November to 4 December, 2022.

Michael Pattison is a critic, writer and curator based in Scotland, where he is a Director of Alchemy Film & Arts. His criticism has been published by Sight & Sound, KINO!, Ekran, Film Comment, Reverse Shot, MUBI and many others. He has taught criticism at film festivals including Karlovy Vary, Warsaw Film Festival, Dokufest (Prizren, Kosovo) and Black Nights (Tallinn, Estonia).

Applications will be completed in English, containing the following:
- CV
- Short biography (approx. 500 characters)
- One article written originally in English on a film related topic (published or not)
- Motivation (max. 1000 characters)

Applications are open only to those over 18 years old and who are able to communicate and write in English.