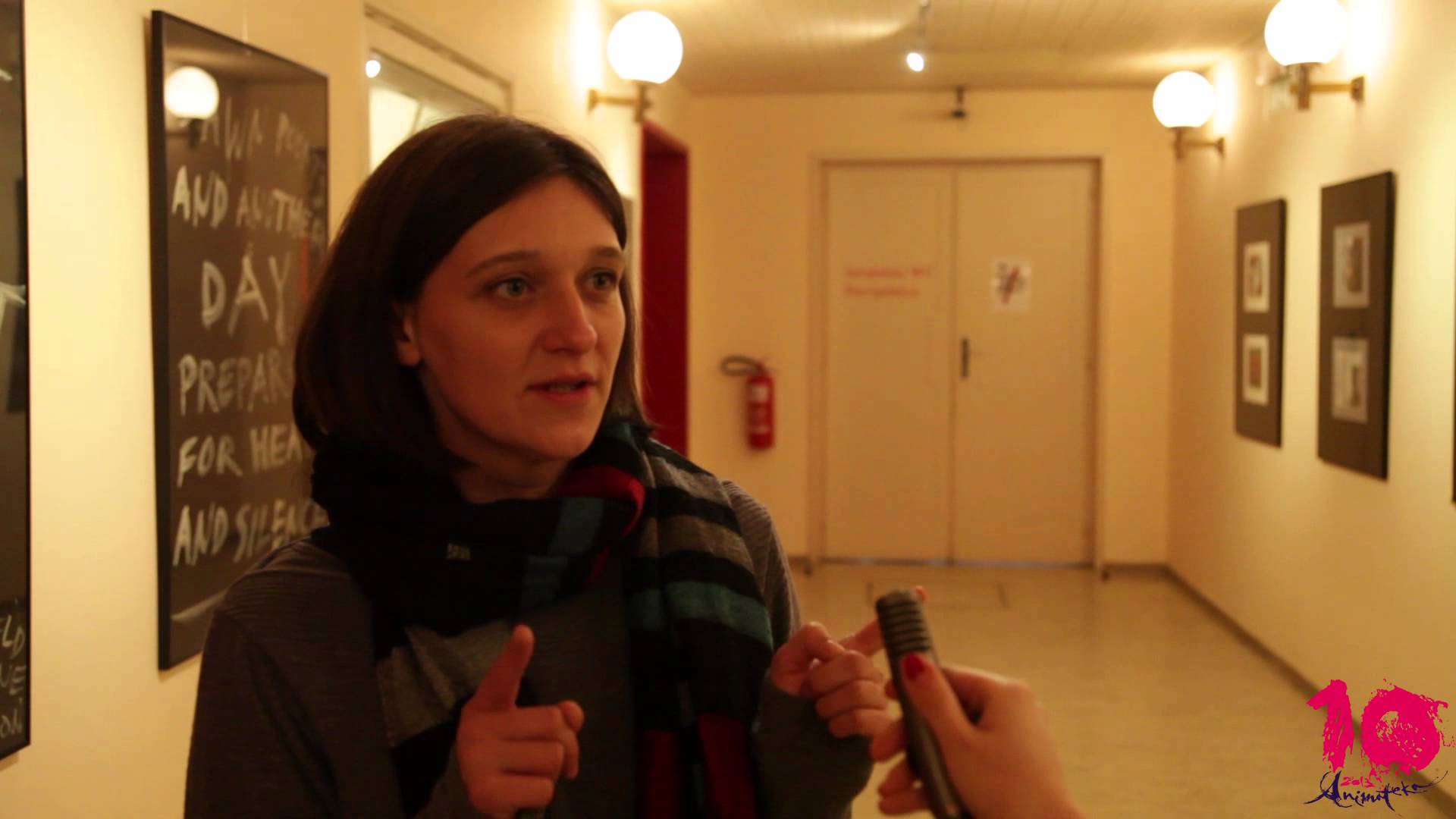 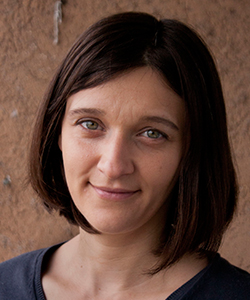 Her big success came with the stop-motion film, Boles (2013), a story of the aspiring writer Philip who meets the extravagant prostitute Tereza made waves along the international festival circuit, winning almost 40 awards and distinctions.

But the Slovenian Špela Čadež is not new to animation, even though she initially studied arts and graphic design. Since 2004, when she completed her first film, she has a consistent viewpoint to share about independent animation, storytelling, and the world of puppets.

ZF: How did you ever consider to do animation? You came from Ljubljana to Germany to study visual design?

SC: I came to Germany and the Academy of Media Arts in Cologne to study interactive design, but I didn't feel comfortable there, I didn't know what to do. Then I realized I needed some animation for projects I'd like to do.

Actually, my first class was an animation puppet one-day workshop. There were puppetmakers from Berlin. I was very new in animation class, but was impressed by everything, so I came home and made my very first little puppet.

I brought it to a professor assistant, he loved it and he immediately said: "You must join us to Annecy next week". I said: "What is Annecy?" I got a space left and then I traveled to the festival -everything was paid by the University at those times.

So, I went there and it was just like a whole new world was opened to me with people doing animation, talking animation. I returned home, and I immediately wanted to do an animated film.

Didn't have any animation education before that, only screenings in Llubljana curated by Igor Prassel [artistic director of Animateka, Slovenia], who was also paramount in my Annecy introductions. And, one year later, I had a film in student competition at Annecy, Zasukanec (2004).

ZF: What was the idea about the first film?

SC: I just wanted to try something completely on my own. I did the lights on my own, the sets, the settings. But the story is always the first thing for me, not the technique. So, I learned a little bit about storytelling  that way.

SC: What was your teachers' reaction?

SC: They loved it, and they even suggested a trip to Portugal to perfect the sound. 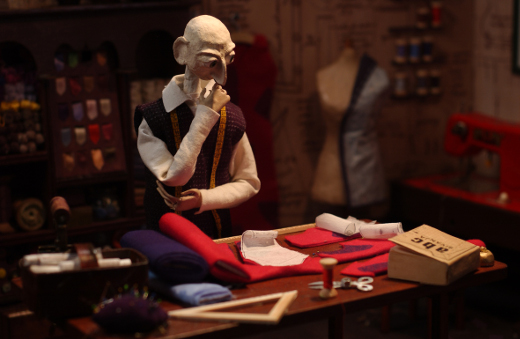 The film was selected in many festivals, and I got to travel and met people. During traveling, I learned so much talking to people, more than I had learned in schools of animation and at University.

SC: [She laughs]. No, one film is only the beginning of a next one. Lovesick was my graduation film, and afterwards I made Marathon (2007) with Izabela Plucinska - I stayed 6 months in Berlin. But the most difficult part was getting back to Slovenia after my studies, for no one in Slovenia, apart from a few people,  knew what independent animation is. 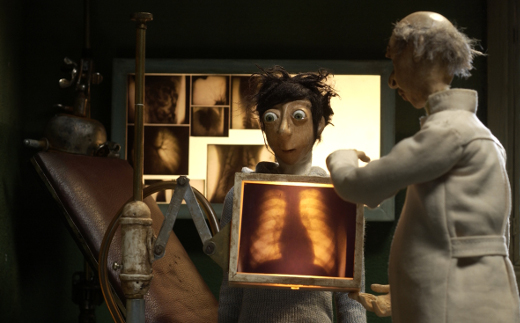 My first application for funding just returned to me with a note to stop this kind of filmmaking, because no one watched the kinds of films I am doing.  It was quite like a shock.  I was spoiled at the Academy of Media Arts; I  even had money to complete the projects, all of them were very supportive to students.

So, it took me four years to finance Boles (2013), my next film. I had to wait for a government change and Slovenian Film Fund administration change, while Igor [Prassel] fought a lot for the government to support animation. So, in the end we managed to get a lot of funding for animation approved -half of it was actually given to us, they said we don't need that much. I was able to do the film the way I wanted to, but it was a painful production nevertheless.

ZF: Boles strikes me as a very Adriatic film in its settings and colour palette.

SC: I do think about colours when designing the sets. In Boles, everything was brownish and warm. Even the main character, the writer Philip is dressed in a warm brown colours. Then the cold Tereza comes to his life.  But I do think that everything has to support the story. 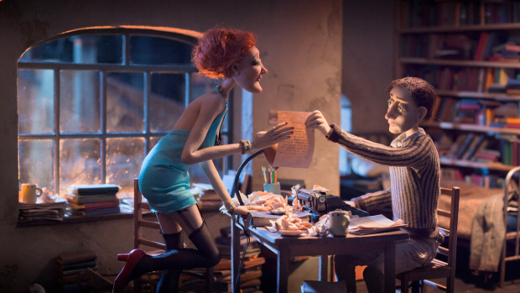 Every time I asked myself what should be the colour or the dress, I always go back to the story and say: "OK, I'll need this feeling, so let's support this feeling with that colour".

ZF: And you have many redheads in your films.

SC: You're right, but I don't know why. My mother is a redhead [she laughs].

ZF: You concentrate on couples of outcasts in your films. Your characters have trouble integrating in the society, but somehow they have to stick together to survive. Is this a covert statement for independent animators, that you need to be together?

SC: Don't we all have trouble to integrate? Regarding independent animation, it is true. We are very lonely, work in dark rooms.

SC: I love stop-motion. Actually, I started animation and puppets because I wanted to get away from the computers and graphic design, sitting in front of the computer 12 hours a day. After the University workshop I attended, I realized I could do something useful with my hands. Everything was useful in the puppet world. There was a new territory for me.

ZF: It shows in your work. All those elongated fingers of Boles when he is lost in the typewriter. Even in your first film, Zasukanec, the tailor has long fingers.

SC: I have the picture of my grandfather, whom I loved very much and died on my 12th birthday. He had really long fingers. He was a doctor, he never worked with hands. 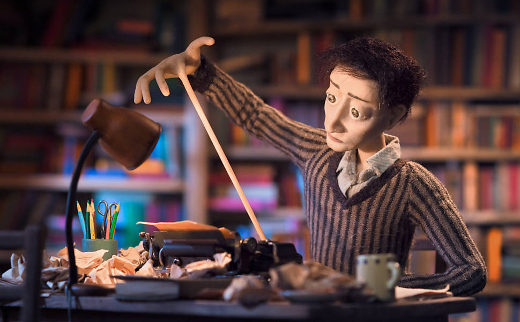 ZF: What I really like about your films is that you start with a mundane, realistic environment which changes into an imaginary world in the process.

SC: My teacher, Lutz Garmsen, then assistant professor in the Academy of Media Arts in Cologne, told me one sentence, that I really stick to it. He told me: "if you take so much time to do things in animation, try to use it for things you cannot do in live-action". We have to show the limits of an imaginative world.

Raimund Krumme always tells me that I am too realistic. But, you know, every time I start making a film, my imagination is always leading me to a different point; yet, in the end it it is still my film. So, if I stay honest to what I say,  then this  is the film I wanted to make.

ZF: What's your next film about?

SC: It is based on a very small piece of news in the newspaper, a two-liner joke almost, but it has the verious serious subject of addiction. It is not a love story, only one person struggling with his addiction. It is not really alcoholism, but I want to describe the addiction process and consequences, independently of time and possible settings.

But I don't have a person this time, but an animal, a badger. You know, the sort of a story when animals get too much food and the food gets stuck in their stomach. Funding was given by Slovenian Film Center and National Radio-Television of Slovenia (RTV), the first time the latter gave funding for an animated short.

Within our national legislation, broadcasting channels should support filmmakers, but this was never implemented till last year.

ZF: How long would you conceive your film to be?

SC: Around 7 minutes. It is cut-out animation in multiplane. I have a lot of fun working on this film, and it is a new challenge for me. We don't have a title yet, but the film is supposed to finish within 2016.  There is a Slovenian legislation that the film must be finished within two years, no matter what, otherwise you'll have to return the funding!

It is a terrible law that does not take account of the animation complexities and time needed, so I will definitely fight to change this status. I cannot even start a feature animation within this time framework alloted.

ZF: Would you like to direct an animation feature?

SC: If I didn't have to struggle so much with low budgets, and I could pay properly people who work for me, yes, I would think so. Of course, this is like saying I would like to fly to the moon. It could take 4 or 6 years of my life, but at the same time, it would be a challenge for me.

But features are a totally different world. It is a very serious-like process, when and where are you going to sell your film. You need a bigger production team.

ZF: What about animation festivals?

SC:  Without them, my work would make no sense, it would be screened nowhere.  Even live-action film festivals start to include animated films in their programme, which is nice. And, of course, animation films can have "serious" subjects, and people acknowledge that.

Here in Anibar, I was two years ago with Boles - I think it was the second festival that screened my film, now I am a jury member.  The organizers are very young and I admire their power. I don't think that many of us are aware of the kind of situation they are. They don't have the privilege to travel around as we do. We forget the freedom that we have - we think that it is self-evident. Making something like this, it is very important for the young community of Peja, Kosova, who are its most faithful audience.It was a very emotional moment for me when I saw such a warm welcome of the Serbian band in one of the Anibar concerts. They loved it, and that's the future, I think.

ZF: What's your own festival future? Are you going to Greece?

SC: Yes, I'll be at Animasyros in September, but that will be my last festival, for I have to concentrate on my film.

ZF: Špela, every bit of success, and thanks for talking to Zippy Frames.

SC: Thank you too.