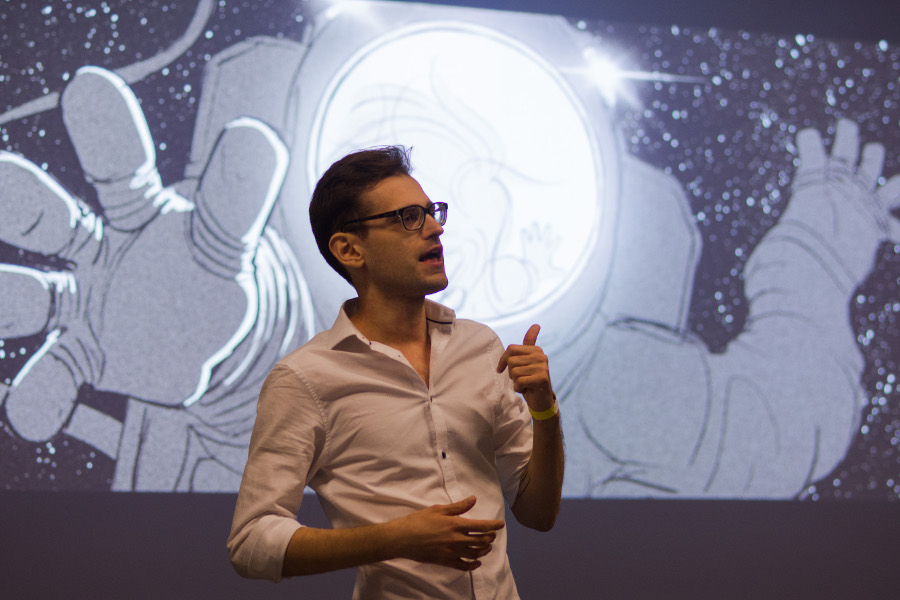 The pitching jury of this year's Animarkt Stop Motion Forum (Jean Thoren, Animation Magazine / Edwina Liard, Ikki Films, and Jacek Spychalski /CeTA) went for the personal and the intimate in the 6-day event.

Animarkt is a unique forum for stop-motion projects, which increasingly attracts more international guests (around 70 animation professionals this year), and manages successfully to integrate a business-like collaborating atmosphere without the hassles of  crowded events.

Warsaw director and producer Michał Łubiński and his project Astra was the big prize recipient, and awarded with the Audiovisual Technology Center (the studio space where Loving Vincent was shot) contribution in-kind in the amount of 60 000 PLN (ca €14 000). Astra will be a story of a six-year-old girl who is trying to prevent her older sister Anna from going to space.

The story has lots of heart. The pitch was excellent, very complete and well organised. Characters design was nicely presented and researched. Fantastic execution!”, wrote the jury in the statement - Jury Statement

Set pieces (15 sets planned, including a hospital building) seemed to have a great significance in Łubiński's intimate story of an illness. Brazilian visual artist Cynthia Levitan (now living in Portugal) pushed the intimate canon to its forbidden theme; her story of the transgender Pierre and Pietra (two souls in the same body), Forbidden Love, was awarded the Audiovisual Technology Center contribution in-kind in the amount of 40 000 PLN. Levitan knows how to stir discussion about a transgender puppet, and a scriptwriter and  co-producer are what she now needs to proceed -in addition to her Lithuanian producer, Vytautas Tinteris. 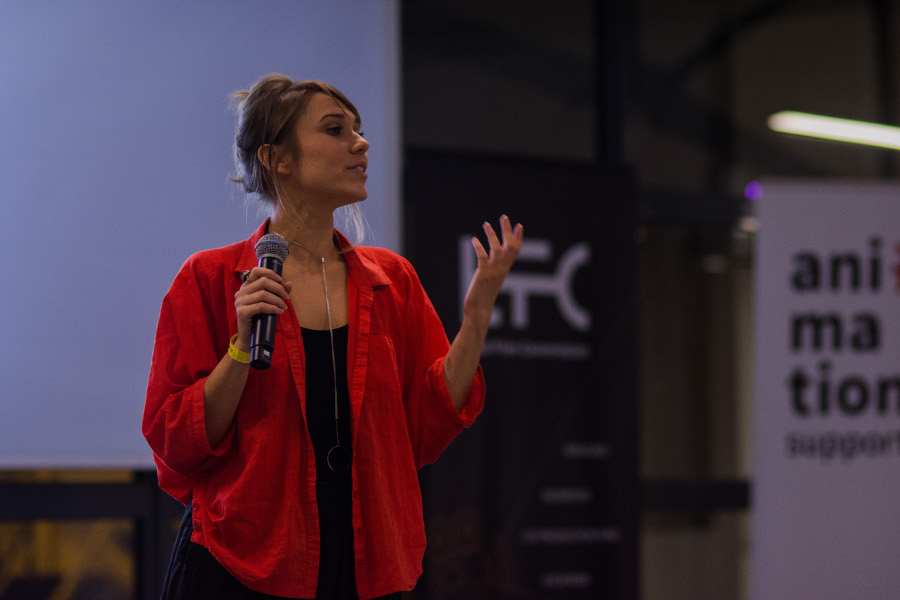 One of the standouts of the pitching forum was Crab by Piotr Chmielewski (with a Master's degree in African studies), and produced by WJTeam. The 5-minute short of a crab in a kitchen (est. budget 50,000 Euros) managed to change the perspective of anthropomorphised animals for its Animarkt viewers, and, in the words of philosophers, to show as 'what is like to be a crab in danger'. Another reworked genre piece, Prime Cutts by Bristol director Marnik Loysen references salami murder, vegan detective, and 1940s film noir in a 8-minute planned, comic spoof extravaganza.

CARTOON Forum participant Péter Vácz presented also at Animarkt his 25-minute, TV-special project Noah's Tree, the story of acknowledging your own feelings in the case of a trauma (here parents' divorce). French production company Vivement lundi! is on board, along with Superbia producer Gábor Osváth. The film is addressed to children and family audience, and it already looks like of those rare examples of dramatic stories, which are not afraid to dig deeper into a child's psyche (and with puppets of elves to kill for). 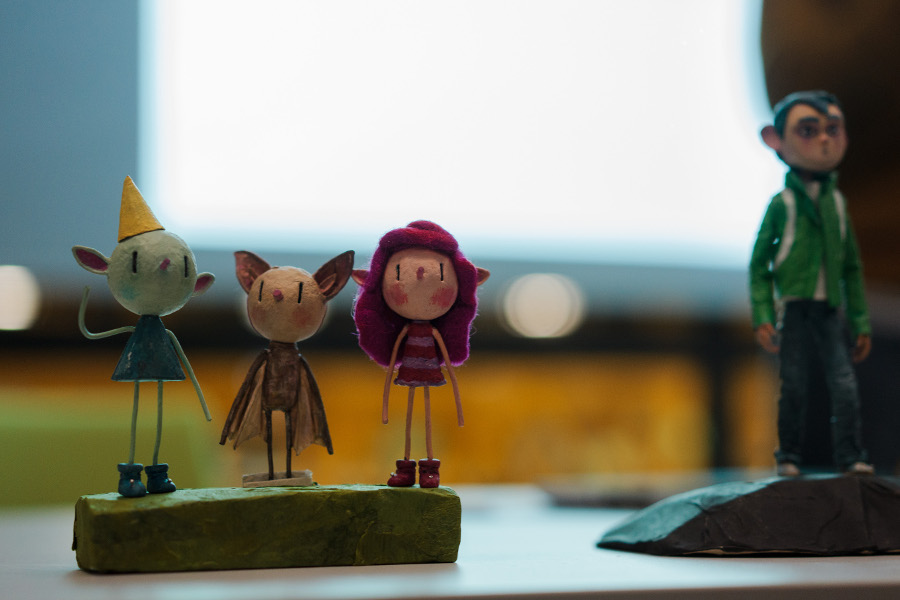 It is a shame and an injustice that Salvation Has No Name by UK animation director Joseph Wallace left empty-handed from Animarkt. This risqué film (but with the story's beats firmly rooted in solid narration) had a spellbinding, Gothic trailer and a subject matter of a disillusioned priest falling in love with a refugee. Both narrative framework (a Greek chorus comments on the actual story) and bold imagery join each other in a calculated play. Wallace has secured the major part of his budget, the project now seeking minor co-producers.

Incoherence project by Dutch director Quentin Haberman manages to have a 3-act structure in 6 minutes, and a story of couple solidarity (mental and physical illness alternating) in another sensitive subject of aging. Estonian Riho Unt may not have been awarded a prize at Animarkt Stop-Motion Forum, but his films are always in the animation circuit radar -usually accompanied with a very high prestige (The Master, Mary and 7 Dwarfs). In the new 16-minute puppet film ready for production, The Wings is a 'go-for-your-dream'  piece set in 1900, and the early days of flying. Funded by Estonian Film Institute, the project now needs co-production partners for post-production.

Varied, global options of stop-motion artistry were offered by the Iranian Queen project (Amin Malekian and Negareh Halimi dir.), See You Soon (dir. Jennifer Skarbnik Lopez), Totem by Katrine Glenhammer, Papo and Pepe by Victoria Cherniaha, Pianola by Patricio Alvarado, Playing God by Matteo Burano. Everybody in the European stop-motion world awaits Of Unwanted Things and People feature film; Agata Gorzadek, director of the Polish segment presented the whole project, but (alas) with visuals of the Czech part of the film -the Polish part is still in development.

Finely coached by Nancy Denney-Phelps and Wim Vanacker), stop-motion project presented at 2018 Animarkt have a budget between 50,000  and 100,000 Euros (depending on film length as well),  some fresh and fine ideas, and a varied development process -but they are all ready to be discovered.

The organizer of ANIMARKT is MOMAKIN – a multi-tasking unit working for popularizing and propagating animation and supporting creators in Poland and in international arenas. The Main Partners of the event are: EC1 Lodz – City of Culture and Lodz Film Commission. The partners of ANIMARKT also include: Audiovisual Technology Center (CeTA) from Wroclaw which is also the founder of the awards for pitching winners, ASAF (Czech Republic), Mozinet (Hungary), Fest Anča International Animation Festival (Slovakia), SPPA – Polish Animation Producers Association, SFP – Polish Filmmakers Association, Dragonframe, DitoGear, Ale kino+. ANIMARKT is partially funded by the International Visegrad Fund, Polish Ministry of Culture and National Heritage, and co-financed by the Polish Film Institute.