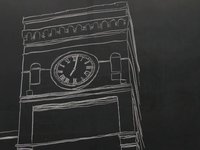 Dustin Grella set up a voicemail service to allow people to leave messages. He then chooses to animate some of them.

The Ode to Bikesharing film is inspired by a message from Thatcher Keats, who looks forward to New York City's bike-share programme. The film and its rationale featured at NYTimes.

Ode to Bikesharing is as fluid, colorful and meditative as a bike ride in The Big Apple.

Dustin Grella is a New Yorker animator and visual artist.

His animated doc Prayers for Peace won many festival awards, including the award for best graduation film at Ottawa Int'l Animation Festival 2011.