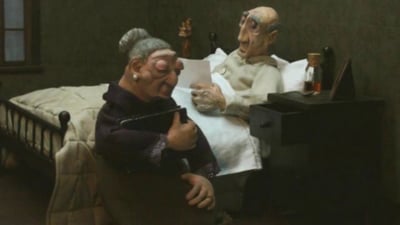 An elderly lady, dedicated to her seriously ill husband, decides to stop to eat quindins to save the life of her husband. But, on his death streambed, he reveals a great secret that changes the life of the couple.

This beautifully executed stop-motion film, directed by David Mussel and Giuliana Danza (with flashback sequences in 2D drawings) reveals the limits of forgiveness.

This student film from Brazil was based on a story written by Luis Fernando Veríssimo, and entered the festival circuit in 2010.