How would it be if you had one last song to sing before the world collapsed? Gaia Alari animates and directs Shania Taub's The Last Song on Earth. The animation video itself is vibrant in its coloring choices, fresh in its juxtaposition of the impending doom vs. the banquet routines, and rhythmic in its editing arrangement. Zippy Frames talked to the director.

ZF: Why did you choose your visual screening format to appear as a square, old photograph? Was it on purpose, and why?

GA: The overall look of the film, with its "super 8" retro frame and the almost square format was definitely designed on purpose: I wanted to nod to the classic American satyric cartoons from the fifties and to the old home videos while also adding something to the message of the song. By dating the video back in time and in a domestic dimension, the threat of an environmental catastrophe feels closer to home, less projected in the future. It is a detail that allowed me to underline that climate change is an issue that has been in the backdrop for decades, especially ever since the economic boom, hence the fifties feels. I love focusing on these details, the meaning of which might go unnoticed but that ultimately add a vibe, maybe in a subconscious way, to the animation.

ZF: The video starts with many grotesque figures (including the one of Death), and proceeds to show finely-dressed people dancing, etc. How important was it for you to show that discrepancy?

GA: The discrepancy is consequential to the storyline: the animation is structured to be a sort of "cosmogony" of the black toxic substance that is the result of human exploitation of the Earth and that paradoxically ends up being the very same poison that intoxicates and drowns our species, in a cycle.

Watch The Last Song on Earth

ZF: Was the Titanic drowning scenario suggested to you by the producers/artists or was it your own idea?

GA: The drowning scenario was my idea but it was actually inspired by a live-action video featuring The Strokes. However, now that you mention it, the producer at the very beginning mentioned that the artist wanted the song to have a Titanic feeling, so I guess that this was the initial spark for the direction the treatment took ultimately.

ZF: The film is very picturesque in its characterization of faces, and human figures. Was it fun to put all those colors and shapes together? How did you approach the film's aesthetics?

GA: It was very fun - I was majorly influenced by the aesthetic of retro American cartoons and the palette is an elaboration of the illustrations by Norman Rockwell with a touch of contemporary art inspired by one of my favorite painters: Chantal Joffe. In short, the majority of the colors throughout the film come down to the green, purple, light blue, and red, but the pace and the maximalist art direction make it quite flamboyant and fun, which was the ultimate purpose: as the song is a protest song disguised as a party folk song, also the visuals represent a plethora of crowds and parties went wrong.

ZF: How closely do you like to stay to the original lyrics? This one already talks about song and dance, but are there any other elements you added yourself?

GA: I do like to follow the lyrics although it is not a must - many videos I made focus majorly on impressions that have little to do with the lyrics. In this case, both I and the artist felt that highlighting the message of the lyrics was one of the important tasks so I kept rather close, especially with the pacing of the visual details. I did decide in full autonomy the representation of the single settings: the jazz club as opposed to the domestic environment, followed again by a theater/music hall. The settings allowed me to spread the story with an almost liquid movement, up to the final crescendo and also allowed me to add something a little more in-depth about the entertainment industry: in particular how a certain kind of entertainment, designed for escapism, tends to blindside people about what surrounds them, as a side-effect

ZF: How was your collaboration in general with the music producer and composer/artist?

GA: It was really good to collaborate with Shaina and with Atlantic Records: my main contact was the producer this time. After my treatment was picked, I was given space and freedom to develop the film the way I wanted, respecting Shaina's initial requests 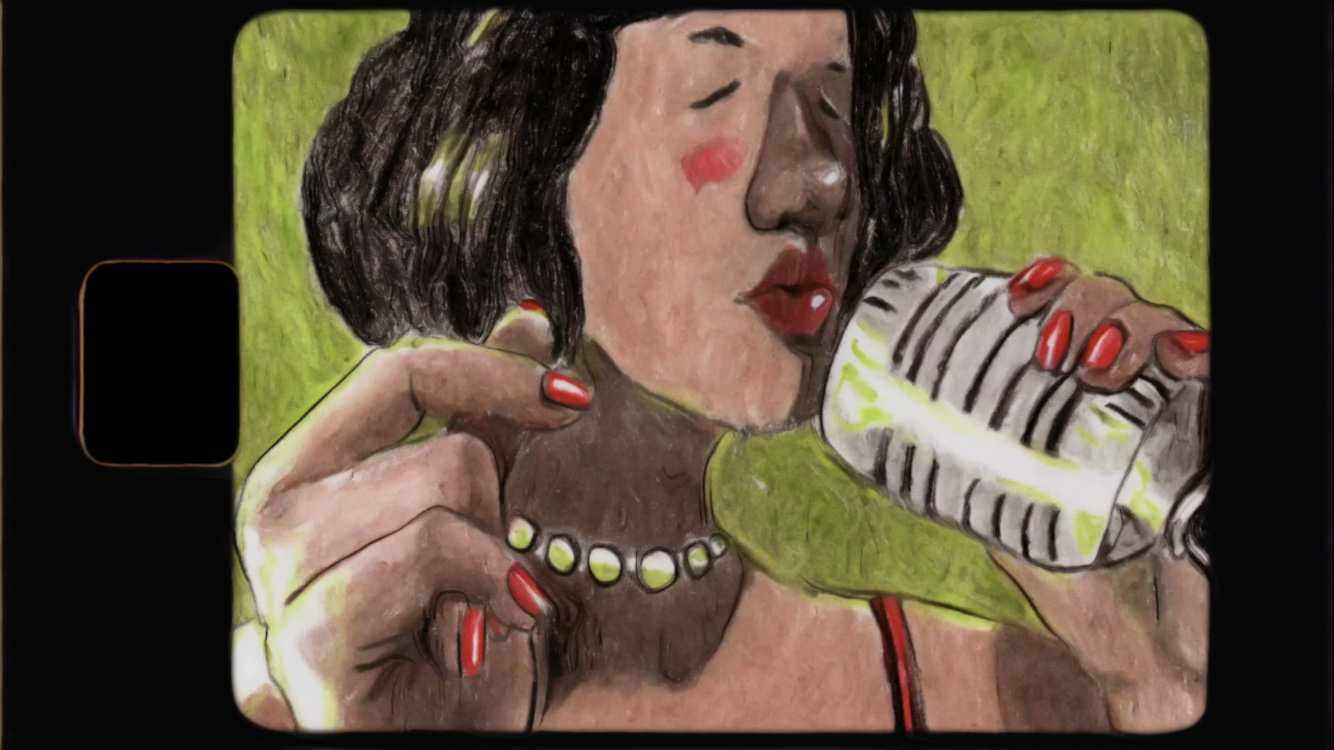 About Gaia Alari
Gaia Alari is an Italian visual artist, director/animator of music videos and short films. After an academic career in Medicine, since 2020 she has been focusing almost exclusively on creating and directing music videos and moving image works, specializing in traditional hand-drawn frame-by-frame animation, as a one-woman crew. She regularly collaborates with international musicians/labels and she has recently been working on directing short films. Her video work was screened and awarded at several film festivals around the world, multiple times. She is currently developing her debut narrative short animated film and she is working on a short animation in the role of co-director and animator (in the process of funding).
She is especially interested in exploring the expressive potential of storytelling through animation, with a keen eye on existential and socio-cultural subjects.