When a giant white whale has washed ashore on a very crowded urban road, everyone would look upset. But not everyone really. Sarah can use her power of poetry and music and be the brave one to confront the whale -and our fears.

ZF: This is a film where poetry (by Céline Maltère) and music play a central part. Was that your intention all along to make a sung poem the focus of your film? .

AF: I always wanted music to be an important part of the film. When I was writing, I kept this idea in mind, and when the poem was brought into the script (quite early in the process), I hoped to successfully turn it into a song. The poem helped create a link between the people and the whale, who are connected without any physical interaction between them. I talked a lot with Céline about the readings that inspired me, and she started pitching poems very quickly. I worked on the script and storyboard, and then I asked her for changes to stick with the new script. Then the work with the composer and the singers gave the poem a new form, and it found its place in the film.

ZF: It is natural to think of many other literary and film influences when thinking of a whale. Did Moby Dick, Pinocchio or any other work influence your decision to use the whale here, and in what way?

AF: I’m really impressed by whales, and I often think of the image of these huge creatures living next to us. During summer, I read two books: both of them use a dead whale as a central point of their story, and a multitude of different characters evolve around it (Le Périple du Cachalot / The Odyssey of the Whale by Pierre Magnan and The Melancholy of Resistance by Laszlo Krasnahorkai). One year later, I got the opportunity to participate in a call for submissions. I wanted to make a movie like those two books, with a dead whale in the middle of a crowd, because of that strong image. At the same time, I started to read 'Moby Dick', and some chapters were really inspiring. I remember one that I pinned up on my wall as a reminder of the kind of movie I wanted to make. The chapter is about a group of sailors who start to feel peaceful and full of love for their mates while plunging their hands into a barrel of smooth whale fat.

ZF: Do you identify with Sarah and her adventure or do you think of her as simply a character in your film?

AF: I identify with every character. Like Sarah, I’m quite curious and not at ease in a grey and gloomy world. But I’m not as brave as her, and I would never go inside a living whale. I also love the crowd, they are stuck in a way of thinking and feeling until they finally let themselves be carried by poetry. They give up their fear and their anger to try something new to be more peaceful. It’s something that I try to do every day. I also identify with the whale who gives herself to these people. There is no reason for why she’s here, but she seems to finally be in the right place to help people.

ZF: This is your first professional film, and a co-production (Novanima, Zorobabel, Incroyable studio). I guess it was a learning curve, but how did you navigate this environment? Did you have time to concentrate on your creative tasks, and what kind of challenges you most faced?

AF: I learned a lot during the production. I also discovered that directing is also making a lot of schedules, writing e-mails, and having phone calls. When I started to work with technicians for layout, animation, and compositing, I struggled to find time to spend on the creative tasks, and it took me several months to draw the backgrounds. I was very concentrated on organizing weeks of the production to propose good working conditions to my collaborators. I didn’t want them to feel oppressed by deadlines, because work is difficult enough as it is. 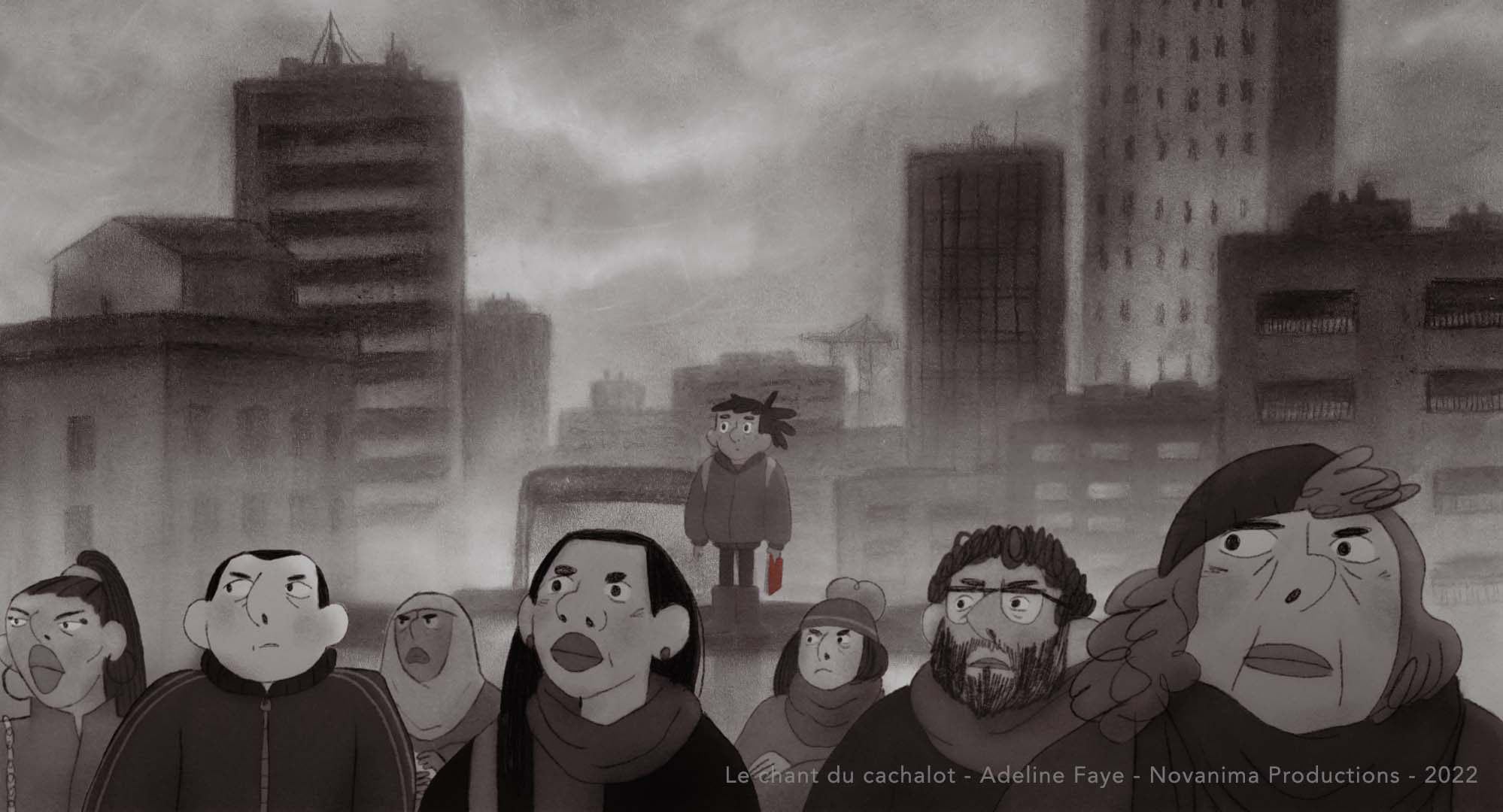 While the animation, music, and sounds were being created, I also took time to rethink the editing and rhythm of the film. It was difficult to estimate how much time I needed to work on the editing, but it’s a creative part that I really loved; I edited until the end of the animation. It also helped me adapt when the animators and I understood that we would not finish in time if we didn’t change the animatic. The main challenge was the long-distance relationship with the producers. I worked most of the time with the team in Rennes, but the producers were in Paris, Nantes and Brussels. It was difficult to communicate, especially for quick questions or discussing the creative parts.

ZF: Were all scenes (including the ones inside the whale) storyboarded from the start? And did you proceed according to plan in terms of scene sequence etc?

AF: I worked on the script and the storyboard at the same time. When I spent too much time on writing, it became too literary and not cinematic enough. I don’t find the same ideas while I’m writing vs. while I’m drawing. I worked with Quentin Marcault on the storyboard, but we didn’t keep a lot of ideas from those work sessions. We used this period to try ideas and to work out problems in the script. Then at the very end of pre-production, we finalized the storyboard with Marta Gennari and took some big decisions, changing for example Sarah’s age: she’s older than in the first versions of the script. The storyboard also changed during the production with the help of editing. I worked with the editor Noémie Azul Loeve, and found new ideas while cutting predicted shots and adding sounds on pictures. The film was in perpetual movement until the end.

ZF: Did you rely completely on your composer to find the right voices for your singers, and what instructions did you give them?

AF: I met Naowel, the composer, as a friend a few months before the start of the production. I discovered her work by chance on a zoom microphone that she lent me, which had some singing tests she’d done for a personal project, and it sounded quite similar to the atmosphere I wanted for the film. When we started working together, she sang everything, and we went crazy listening to just her voice all the time, so I asked three friends to sing some of the parts just to try. It worked so well that we decided to record them for the final version. The three other singers are their family members. Working with them was really convenient because we had to do some retakes after the recording, and they were available and motivated to do it.
I’m not a musician, so the instructions were given by Naowel. The singers and the sound engineer also gave ideas and proposals.

ZF: You had a few collaborators in the artistic process, but how much were you personally involved in the artistic look of the film, and the day-to-day animating? Any more details about your artistic vision would be welcome here as well.

AF:  Doing films is a collective process, and it’s what I love: working with different people. I tried to be very attentive to new propositions without forgetting my vision. I’m not an animator, so before we started animation, I worked with Marta Gennari for the layout and the character design to have a solid foundation for the animation work. Then, I worked with two animators that I knew before and that I liked as professionals and as people. With Gwendal Stephan, we worked for nine months in the same place, so it was very easy to discuss and give directions. I also asked for his opinion when I worked on the editing of the animatic to have his artistic point of view and his technical advice for animation. We worked on animation with Quentin Marcault remotely. I was in school with Quentin and knew his work style, so it was easy to communicate with him. Also, as he was involved in the film since the very beginning, it was helpful to converse with him during the production and he easily understood what I wanted to say. Both of them are great animators, and I was very confident about their abilities to animate the film.

ZF: Do you think that the way to make people aware of something important is to take them out of their comfort zone?

AF:  I’m not at ease with the principle of the comfort zone. I don’t think it’s a bad thing to feel comfortable. But what I do like is the feeling of always having the possibility to sidestep if you want, to see things differently. With this film, I wanted to show people who change their way of seeing the world and its inhabitants, but not with violence (as going out of our comfort zone means being violent with ourselves). They’re not forced to be part of this experience. Even with the dead body of the whale in the middle of the street, I wanted the atmosphere to be gentle and calm. We can’t say that people in the film went out of their comfort zone because they seemed more comfortable at the end of the film than at the beginning. They just took time to see things differently.

'Whale's Song' is a call to companionship which cannot be realized without a whale present. Dreary charcoal-like stroke gives their place to the bright inside pink of a whale, while Adeline Faye makes her character curious and adventurous, inventive and compassionate all along. Far from being a superhero, Sarah is the magician of the road herself, and a composer of the always pertinent song to be uttered. Rich in group characterization and ellipitical when it comes to the whale mystery, this is a sweetly constructed animated song that puts our ears into as much engagement as our eyes are. A film to sing about.

Adeline began her studies in cinema with a concentration in animation at the DMA of Cournon d’Auvergne. She continued her schooling at the Poudrière school of Valence in 2017. During this time, she also versed herself in self-publishing, bookbinding, and illustration. At the end of her studies, she directed a short film for the collection « En sortant de l’école » (School’s Out) and began writing Whale’s Song, which is her first personal and professional short film.