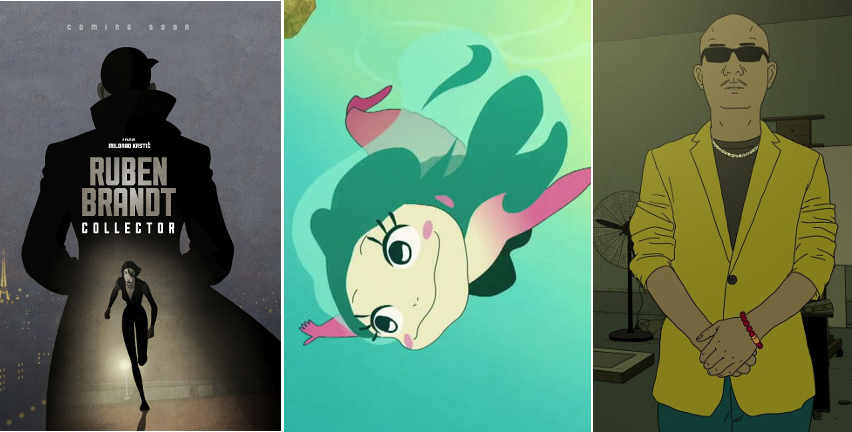 The Hungarian Ruben Brandt, Collector entry by Milorad Krstic [read more about it here]  represents European animation, as well as Aardman's stop-motion entry Early Man (Nick Park). Of course, if you consider that most of the puppet animation was made in UK, Isle of Dogs by Wes Anderson could be 'European' (but production and financing is all US here).

The 2017 Annecy-awarded Lu Over the Wall by Masaaki Yuasa, the friendship of a boy and a mermaid, has been submitted for consideration, as well as the 2D cut-out Tito and the Birds by Gustavo Steinberg, Gabriel Bitar and André Catoto Dias.

Latin American animation gets a second spot here with the Mexican feature Ana and Bruno, dir. Carlos Carrera.  The highly controversial Have A Nice Day! by Liu Jian (Olga Bobrowska describes at Zippy Frames the repercussions of its Annecy festival withdrawal) may have a very long shot at being nominated; however, considering that in previous years, these films were not even submitted to the relevant Academy branch,  you may still call it a progress after all.

Things might be better for the highly amiable On Happiness Road by Hsin- Yin Sung [read our review] and Mamoru Hosoda's  (Summer Wars) new film Mirai [review]. Both Mirai and Lu Over the Wall are distributed by GKIDS, which has a record of 10 nominations for Best Animated Feature (the last one being The Breadwinner by Nora Twomey) since 2009.

Both the recent Annecy winner Funan by Denis Do and the new Bunuel in the Labyrinth of Turtles by Salvador Simó are here absent; probably a 2020 Academy Award run will be in place for them. The submitted features, listed in alphabetical order, are:

Several of the films have not yet had their required Los Angeles qualifying run.  Submitted features must fulfill the theatrical release requirements and comply with all of the category’s other qualifying rules before they can advance in the voting process.  Sixteen or more films must qualify for the maximum of five nominees to be voted.

Nominations for the 91st Academy Awards will be announced on Tuesday, January 22, 2019. The 91st Oscars® will be held on Sunday, February 24, 2019, at the Dolby Theatre® at Hollywood & Highland Center® in Hollywood.