Rocks in My Pockets Review: When Generations and Genes Collide

Rocks in My Pockets Review: When Generations and Genes Collide 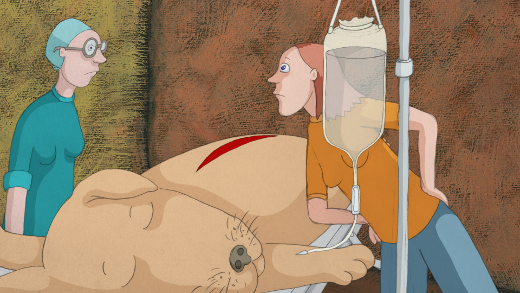 Independent animated features have shown their best qualities when abandoning the clientele of kids' fairy tales, but at the same time becoming more personal and self-reflexive.

The artistic success of Persepolis and Waltz with Bashir (both of them told from a first-person narration) guarantee attention from the live-action audience, especially when their animation technique refuses to invoke exactly the state of the art gimmicks that the industry wants.

The US/Latvian independent animator Signe Baumane has focused on investigations of power within gender in her short works (Teat Beat of Sex, Birth,Tarzan), and now moves into the feature animation terrain to preset a "funny story about depression".

She has already secured a prize at Karlovy Vary fest, while the film also competes for the 2015 Academy Awards.

With her own, accented voiceover and a semi-autobiographical topic about five female members of her family facing depression, Rocks in My Pocket is a hand-drawn delightful, entertaining but strong statement against discrimination, medical malpractices and the inability to find your own voice.

Moving both over time and places (but keeping the same sense of enclosed space throughout), Rocks in My Pockets spends its first half to tell the powerful story of Anna, Signe's grandmother, and the story of Latvia and its women between 1918 and the immediate post-WWII years of the Soviet occupation.

Political oppression here gets entangled with individual oppression, and the educated Anna will soon face her choices that has to stick to to lead her to her own death. But since suicide is not a topic to be discussed in Anna's family, concepts need to translate into images -and here comes animation.

The 2D hand drawn figures present people with no facial muscular movements, but with their bodily parts ready to elongate and exaggerate (but not explode) when the narrative commands.

Yet nothing is much terrifying in this film, which translates the nature of the disease into peaceful animal accompaniments in the forest.

Miranda the artist, Irbe the quiet music teacher who lives alone in the company of a menacing (so rational) chessboard, Linda who is getting obsessed about getting married, all evoke in turn their corresponding animals -including Jan Švankmajer and a surrealistic presence, but with a gentle touch.

Baumane does not want to overawe us with the dark mysteries of the human psyche, but she certainly wants us to notice that there is more than meets the eye. Signe's segment is the most dramatic and powerful of the film, when we finally leave history and come face to face with the rocks that are in our pockets.

Poignant remarks about mental hospitals, and the place of women in patriarchal societies makes pregnacies almost a litmus test for something being done completely wrong in our treatment of depression, and the treatment of women in particular as hopeless agents of diseases.

Its simple, almost faded color palette and the always enjoyable score by Kristian Sensini again disguise the theme of the film, and present  its many, gracefully interweaven stories as something light and matter of course; it is only when we realise the number of suicides that we know we are not in rabbitland anymore.

Rocks in My Pockets connects with Don Hertzfeldt's It's Such A Beautiful Day in telling a difficult story from the inside, but Baumane's version presents a more European version of history and genealogy, and our urgent desire to connect with people.

The film's ending and message about the proper way to connect feels a bit forced, but the journey is exciting.

Rocks in my Pockets by Signe Baumane is now available on Vimeo On Demand.