The 10th CHILEMONOS International Animation Festival has awarded its winners in its second online version.

'Bestia' (2021), directed by Hugo Covarrubias, which had its National Premiere in CHILEMONOS stands out as the winner.  With 15 minutes of duration and inspired by real facts, 'It narrates the secret life of a woman who works in the Dirección Nacional de Inteligencia (National Intelligence Directorate) and trains dogs to commit crimes under military dictatorship. The relationship with her dog, her body, her fears and frustrations reveal a macabre fracture in her mind and in the country', as the synopsis indicates.

I want to say on behalf of the whole team that we are very happy to receive this award, it is something very important for us. Also to thank CHILEMONOS for all they do for the Chilean animation, which in the case of “Bestia” has been very incredible… we had the opportunity to do a masterclass, to premiere and to present the short film with a very good reception… it was amazing to see how people reacted, it is something totally unusual for us, especially in this online format where everything can be very cold, but the warmth that there was that day was incredible, we all ran out of words - Hugo Covarrubias

'Bestia' was selected from 282 productions that ran for the Latin American competition of animated short films and competed with 20 other short films from countries such as Mexico, Argentina, Colombia, Chile, Peru and Brazil, among those highlights 'Tío' (2021) by Juan Medina, who from Mexico took the second place of the competition; 'La Casa de la Memoria' (2020), by Sofía Rosales Arreola, also from Mexico, who held third place, and “La Copia Feliz del Edén” (2021), by Samuel Restucci and Emilio Romero, from Chile, who received Honorable Mention.

In the international competition of short animation (20 films in competition), 'Heart of Gold' (2020), by the French director Simon Filliot, took first place. The short film tells the story of a mother who 'Sees the opportunity to escape the hardships of a life of poverty by selling her organs to an elderly neighbor, sick and very rich. So she delivers his own meat in exchange for gold. Little by little, the need gives way to a greed for more gold', according to the film's synopsis.

A stop motion film is a lot of work. I had my first idea in 2013 and it was 3 months of construction of sets and dolls, then almost 3 months of shooting and a total of 17,000 images. Besides I am not only a director, I am also a director of photography, I do the lighting… I realized how difficult it is to be a director and the solitude it implies, even if I had a great team. With all that, I will be very excited if the movie can please someone, if it can excite someone. Thank you very much for this award - Simon Filliot

“Orchestra Rehearsal” (2021) by the Russian directress Tatiana Okruzhnova in second place and “The Snow Ball” (2020) by the Canadian Rick MacDonald in third place.

In the Latin American + Spain competiton of animated feature films, 10 productions were received in total, of which, 3 of them were selected to participate in the competition. Among them, the Brazilian film 'Tarsilinha', directed by Celia Catunda and Kiko Mistrorigo from the production company Pinguim Content, was positioned as the winner, whom, inspired by the work of the Brazilian painter Tarsila do Amaral, tells the story of Tarsila, an 8-year-old girl on a journey to save her mother's memory.

“Tarsilinha” competed with 2 other feature films of high production: “Escuela de Miedo”, of the Mexican Anima Studio and “D’Artacán y los tres Mosqueperros”, of the Spanish studio Apolo Films, productions that we will soon be able to watch on the big screen.

Among the 55 productions that ran for the Latin American competition of animated series, 18 were selected. Of these, was awarded 'Madhouse' (2020), by Colombian Silvia Prietov, from Lucy Animation Studio - La Tina, followed by 'Conta Comigo – As Meias da Mel' (2020), by the Brazilians Andrés Lieban and Alessandro Monnerat of 2D Lab, and in second place 'Clube da Anittinha' (2020), by Fernando Finamore and Michele Massagli, by Birdo Studio - Gloob, from Brazil.

In the Latin American Short Film  Student Competition, 24 productions  (out of 144 applicants) were selected, of which 'Memories for sale' (2020), directed by Manuel Lopez of the University Veritas of Costa Rica took first place; followed by 'Merenguito' (2020), by the Peruvian director M.V. Endruhn, from the Toulouse Lautrec school; “Canción de Lobos” (2020), by the Chilean Joshua Chung from the Universidad de las Américas, in the third place; “Beyond Space” (2021) by the director Beatriz Álvarez, who from the Escuela de Animación y Arte Digital of Mexico was awarded with Honorable Mention.

In the International Short Film School Competition, which, with 828 applicants and 24 selected productions, stands out as the winner of 'Coffin' (2019), from France, of the directors Yuanqing Cai, Nathan Crabot, Houzhi Huang, Mikolaj Janiw, Mandimby Lebon and Théo Tran Ngoc, representing the Gobelins School, l'École de l'image; second is 'I'm a Pebble' (2020), also from France, directed by Mélanie Berteraut Platon, Yasmine Bresson, Léo Coulombier, Nicolas Grondin, Maxime Le Chapelain and Louise M, of the French School of Applied Arts - ESMA; and third, a post shared by two productions: on the one hand 'Fur Coats' (2020), directed by Lucie Vostárková, of the Univerzita Tomáše Bati ve Zlíně - UTB, of the Czech Republic, and on the other, 'The edge', from Switzerland, directed by Zaide Kutay and Géraldine Cammisar, from the Hochschule Luzern school of the University of Applied Sciences and Arts of Lucerne.

Activities open to all audiences
In addition to being able to see the productions in competition for free in OndaMedia, CHILEMONOS's audience was able to participate in masterclasses, workshops classes and talks given by renowned animation exponents, such as Christian Andrade (Unreal Engine), Juan Medina (Outik Studio) and Mario Quiñones (Moho), as well as the making of process directed by the directors and directresses of the competing films. Te activities brought together 7,223 people registered during the 18 days of the festival.

Jorge R. Gutiérrez and Sandra Equihua  conducted the open-to-public conversation 'Maya and the Three', where they addressed issues related to the production work and the creative process of the series that Gutiérrez created, wrote and directed for Netflix and where Equihua designed and made the voices of the characters. 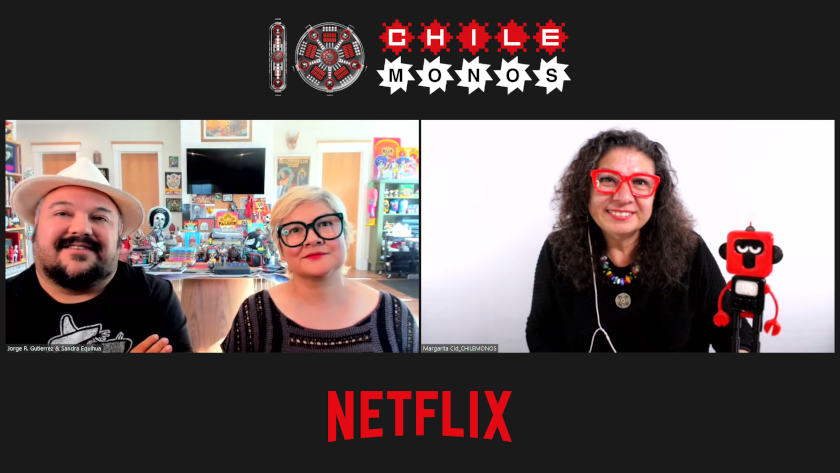 Jorge Gutiérrez was awarded the CHILEMONOS Icon Director award, recognition given to filmmakers who have not only triumphed and consolidated their works in the highest part of the international animated industry, but have also done so by maintaining their identity and generating a seal of their own.

The 10th CHILEMONOS International Animation Festival, was an activity financed by the Chilean Ministry of Cultures, Arts and Heritage, through the call of the Audiovisual Fund 2021. 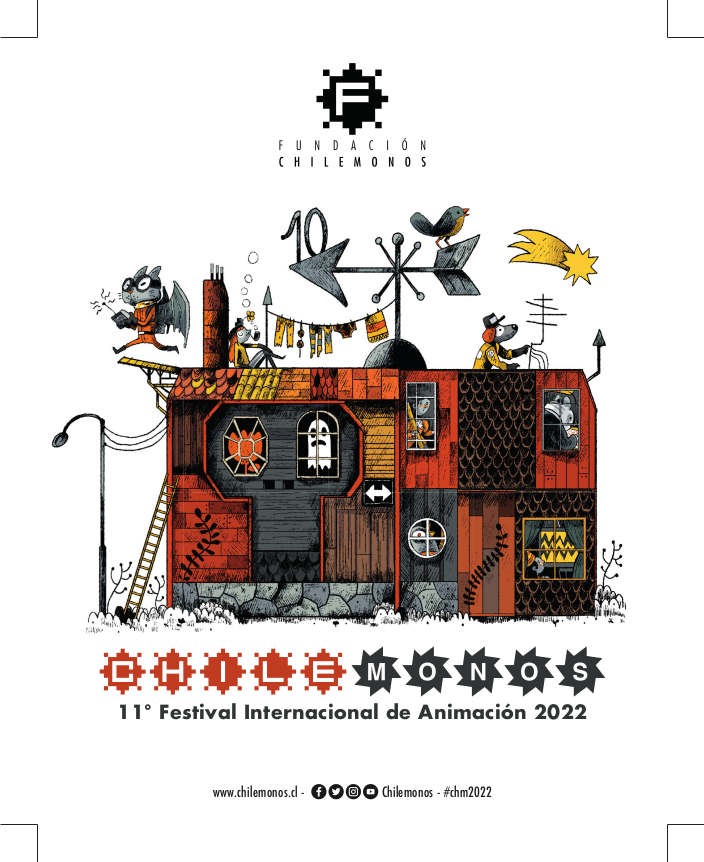