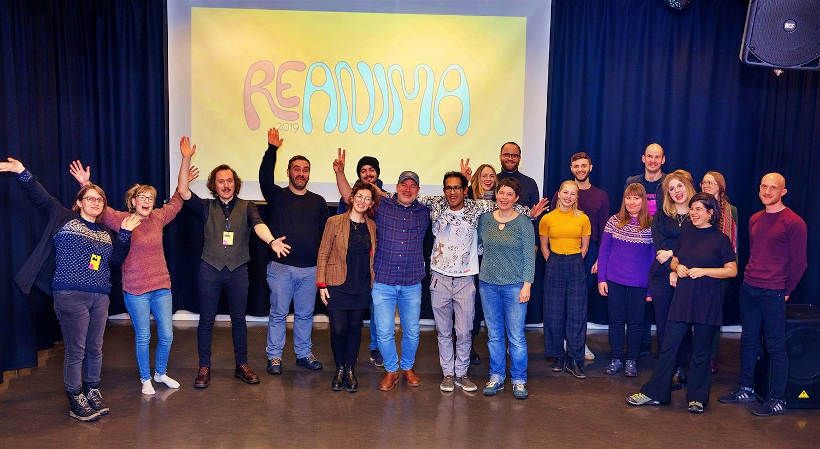 The (Hard) Construction Of An Animation Festival: Interview With ReAnima Festival Organizers

Bergen International Animation Festival ReAnima, now in its 4th edition, wants to "help create a wider audience that can enjoy and understand what animated art is all about". As the festival (12-15 Nov 2020 are the dates of its current edition) promises to embrace novelty and variety" we found out that it is the best opportunity to let its organizers talk to Zippy Frames.

ZF: What is your profession and your role within ReAnima?

Ingvild: I’m a media scholar with a master’s degree in Media Studies. I also have a bachelor’s degree in Cultural Studies and Social Science, with a specialization in Japan and the Japanese language. Both degrees are from the University of Bergen.

I’m a Producer for the festival. In this role, my main task is to organize exhibitions at Bergen Public Library that showcase the library’s animated films and books about animation, and which advertise ReAnima and our events. I also write and edit promotional texts for the festival, organize meetings and short film programs, keep in touch with some of our partners, and assist the Festival Director (Jair S. Álvarez) and Head of Production (Simon Furdal) in picking the films for our short film programs, from a large selection of submitted films.

My other role is as a Speaker. In this role, I do research for and hold annual lectures on animation at Bergen Public Library. In order to do this research, I’ve been contacting and keeping in touch with animators and animation teachers across Norway.

Simon: I am an animator and my role on the Reanima team is that of Head producer.

ZF: How did you get into ReAnima?

Simon: I got into ReAnima after meeting Jair in 2018, when he asked me to make the trailer for that edition. I also sat on the jury that year, and I joined the production team the year after and the rest is story.

Ingvild: In the fall semester of 2017, I happened to see a ReAnima poster hanging on a wall at my old faculty at the University of Bergen. I was surprised, because I had no idea that Bergen had a new animation festival! I knew we used to have a small animation festival in Bergen, but I also knew that it had ended many years ago. On the last day of this first edition of ReAnima, I went to check out the festival program. This just proves that posters are still a simple, yet effective way of getting people to discover new things!

Later, I contacted the festival to ask if I could meet with them, to discuss joining the festival team. In January of 2018, I met with the Festival Director, Jair S. Álvarez (Kropka), and the former Organization Director, Solveig Øybekk Paasche, and officially joined the team.

ZF: What is the character of the festival in terms of selection and programming? What kind of films would you like to select (experimental, narrative, Nordic, anything else)?

Simon: We are an international festival, and our competition program have contributions from all over the world. The other half of our program for 2020 focuses on animation made in Bergen. By showcasing all the great local animations and animators we hope to stimulate the local animation scene and also celebrate Bergen's 950th year anniversary.

Ingvild: ReAnima is a diverse festival with a program that has both, short films and feature films. Films for children and films for adults. Also student and professional films. Lesser known or independent films and bigger and more commercial films; story-driven animation and more abstract animation. The festival has something for everybody!

I’d also love to have short film selections from Japan and Finland. This year, I’m doing a short lecture on animation from Bergen, in order to introduce a selection of short animated films from Bergen, in celebration of the city’s 950-year anniversary.

ZF: Do you think of ReAnima as an audience-friendly or industry-friendly festival? Or perhaps these terms do not apply to your festival?

Ingvild: ReAnima has many free events, both for children and adults, at a well-known and easily accessible venue like Bergen Public Library, and there’s a great variety in the types of films we offer screenings for. I think this is part of what makes it audience friendly. ReAnima is also industry friendly, because it creates a meeting place for local and international animators, producers, animation teachers, media scholars and animation lovers.

Simon: ReAnima is mainly audience focused and our program reflects our vision of showing independent, artful and socially relevant films, but we also cater to the industry in the form of masterclasses, social events and forum talks.

ZF: What has the response from the people been like? Are there different kinds of responses from University students, general audience?

Ingvild: I’ve noticed that many seem to like the free animation workshop for kids. Many parents or grandparents have contacted us about it. I hope we can continue to offer this event in the future.

Some have also asked about the possibility of animation workshops for older people, like teenagers, students or older adults. The master classes and the animation lectures seem to be popular with students.

Simon: In my view we have had the greatest response from art/film students, who really enjoyed our fresh and unique program. We’ve also had great response from our youngest audience, in the children’s workshop and film program.

ZF: How is the animation industry in Bergen?

Ingvild: The animation industry in Bergen consists of several small studios, with some of the studios run by only one person. There are no larger studios, like Qvisten or Mikrofilm in Oslo. Still, there’s a lot more animation activity going on in Bergen than I thought there might be, before I started doing some research on the topic a few years ago.

There are over a dozen animation studios in Bergen. There are also five different places in Bergen where it’s possible to study and practice animation, ranging from animation classes for children and teenagers, to one- and two-year college studies, to being able to focus your bachelor’s or master’s degree in art or design on animation.

Some of the smaller studios in Bergen have also been involved in bigger projects. For example, Den siste skilling and BUG have teamed up with foreign animation studios to make the feature film Richard the Stork (2017), which has now been greenlit for a sequel. The Bergen production studio Embla Film, made Bergen’s first feature film, The Man Who Knew 75 Languages (2016), in collaboration with the foreign studios Fralita Film & Fumi Studio.

Simon: The industry in Bergen is very small, with only a couple of studios exclusively working with animation. The art academy has some talented animation teachers however, and so some students produce animation for their thesis projects.

ZF: What is the potential of an animation festival like ReAnima? And why do you think it is important to continue that way?

Ingvild: ReAnima offers a free animation workshop for younger children, so they can experiment with animation and have a good time. We hope this will spark their interest in animation as an art form, so that they’ll continue watching animation and visiting ReAnima as they grow up-- or so that they’ll be interested in becoming animators or studying animation theory themselves. Every autumn, ReAnima enables local and international animators, producers, animation teachers, media scholars and animation lovers to meet, talk to each other, inspire each other, and to hopefully form a network.

ReAnima is also needed because there are few other places to view lesser known and less commercial animated films in Bergen. ReAnima puts great value on human rights, the environment and other causes, and uses the art of animation to try to raise awareness for these issues. Visual stories are a powerful tool that can be used to provoke understanding and empathy in the viewer. We already collaborated with local human rights organizations like Rafto foundation.

We have many plans for the future involving new partners to make more innovative events, create a calendar to screen films out of our dates and work with ONG's to promote the use of renewable energy and non harmful materials.

Simon: As an animator myself, I can never understate the power, magic and growing relevance of animation in our cultural scene and in our learning and work environments. I think it is vital for a festival like ours, to show new talent and be in the avant garde of animation development both technologically and artistically. And to offer a different take from regular cinema programming. 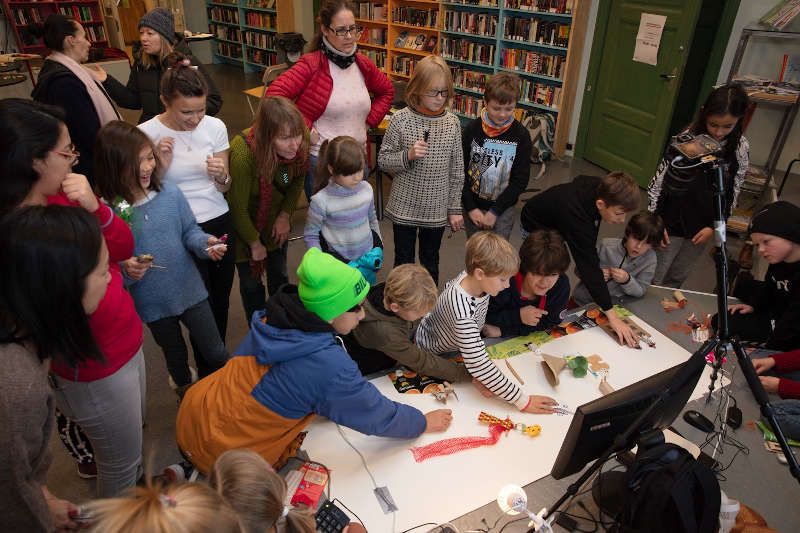 ZF: How has the pandemic affected this year's edition in Reanima?

Simon: The uncertainties surrounding gatherings and cultural events, as well as difficulty getting funding due to the situation has certainly posed some challenges. We have strived to have alternatives in place, should new regulations be imposed come november. Apart from that we hope to have the festival in our usual venues, albeit with a slightly modified and limited program than first envisioned.

ZF: Why did you decide to start a festival in a foreign country? And why Bergen in particular?

J.S.:Well, there is a personal story with the city and an artistic challenge. I love Bergen. In the past 10 years, I have been living half of my time here. Bergen is a spectacular and vibrant place for a festival like ReAnima. I experienced a personal growth in the city and I would like to give Bergensers something in return; a tool that may help them expand their perspective on reality, one to look beyond mainstream culture. I truly believe independent animation is that powerful tool.

ZF: Let's start with the basics. Which are the main festival competitions and the core of its programme?

J.S.: ReAnima's core is the promotion of independent animation films. Also, the will to create a community of audience, professionals and industry in Norway's second largest city in order to exploit the opportunities and talent in our region. Our main competitions are: Norwegian, Scandinavian, Professional, Student, Experimental, Animated Documentary, Music Animated films... and we are thinking about adding a new Human Rights competition.

ZF: What are the challenges of doing ReAnima independently in terms of organizing? Finding sponsors, venues etc. are the usual challenges.

J.S: This is a very complex question; we've been having the same challenges since we started this adventure independently and without any cultural institution supporting us. Also, there are some structural barriers, typical of the culture management system. These make it difficult for cultural institutions to see the potential of our project for the city. Consequently, possible private sponsors are reticent to support us. Bergen is a city where the cultural offer is mainly music, theaters and museums. The lack of knowledge about independent animation affects people and key players' perception of the cultural sphere in Bergen at the moment to assess ReAnima. But on the other hand, we found many really great artists, professors, colleagues, friends and audience that encourage us to keep building ReAnima. Thanks to them we will keep working with a smile