The Swiss festival Press release gave its top prize to a UK film.

The 12th edition of the International Festival for Animation Film  with much varied programmes, such as the "War and Peace" theme, "Animation and Multimedia" has given its awards. The Annecy-awarded "The Bigger Picture" (GB, 2014) by Daisy Jacobs has been picked as the "Best Film" in the International Competition.

The film involves life-size painted characters interacting with real objects, and has already been awarded at Cannes Cinefondation and various animation festivals.

The audience award was given to My Own Personal Moose by Leonid Shmelkov (RU, 2013).

"Oh Wal" (CH 2014) by Joana Locher led the way in the Swiss Competition and won the award for "Best Swiss" entry.

The film tells the story of the fishing cat that has picked out the biggest nugget in the pond – the whale. When, after a long time planning, the cat finally lands the whale and eats it, the fish are furious about the demise of the whale, their god. They plot their revenge.

The Swiss animator Mauro Carraro had a double victory: Swiss special mention for his Aubade and the audience award for the same film.

In the "For A Young Audience" CATEGORY, Dmitry Vysotskiy won the award for "Best Kids" with "Pik Pik Pik" (RU 2014). 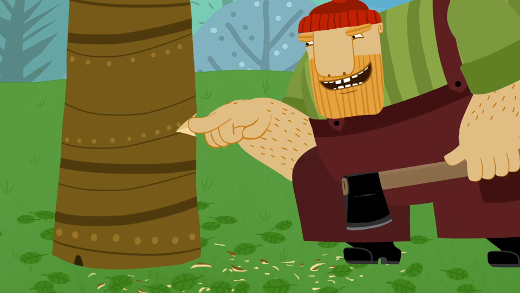 With 14,800 cinema tickets sold and more than 6,300 admissions to the festival's other events, it seems justifiable for Annette Schindler, festival director to state  that Fantoche impressed  visitors with its clearly defined profile and very personal feel.

Our international guests and local visitors alike appreciate this greatly and also contribute substantially towards this lovely mood."

The festival returns to Baden next year from 1 to 6 September 2015. In the meantime, it organizes its Besf of Fantoche tours.

Review all winners and see the Best of Fantoche proramme.

Fantoche will be taking its "Best of" programmes on tour around various Swiss cities: Two strands of the Fantoche programme will be toured around Swiss cinemas: BEST OF FANTOCHE ON TOUR 2014 showcases the best animated short films from the "International Competition" and "Swiss Competition"; BEST KIDS 2014 features the latest cartoons for children aged 8 or above.

Best of Fantoche on Tour