I was at Monstra Festival 2021 (22 July - 1 August 2021), bringing to the Zippy Frames readers an overview of the new Portuguese projects in a corresponding presentation panel; these are projects currently in production, most of which are scheduled for a 2022 launch. It was a long event, with three different panels over three hours. I tried to make a resume of what was shown, and its most interesting bits among feature films, shorts, series, and special programs in a really fine presentation.

The panels were moderated by the festival director, Fernando Galrito, and began with the animated feature 'Nayola' presentation - which was already the subject of an interview to ZF with José Miguel Ribeiro film’s director. The feature has a script by Virgílio Almeida and is based on the play, "A Caixa Preta"/ Black Box, by José Eduardo Agualusa and Mia Couto. It counted with the presence of its director, the Belgian producer Geert Van Goethem (S.O.I.L.), among other team members. 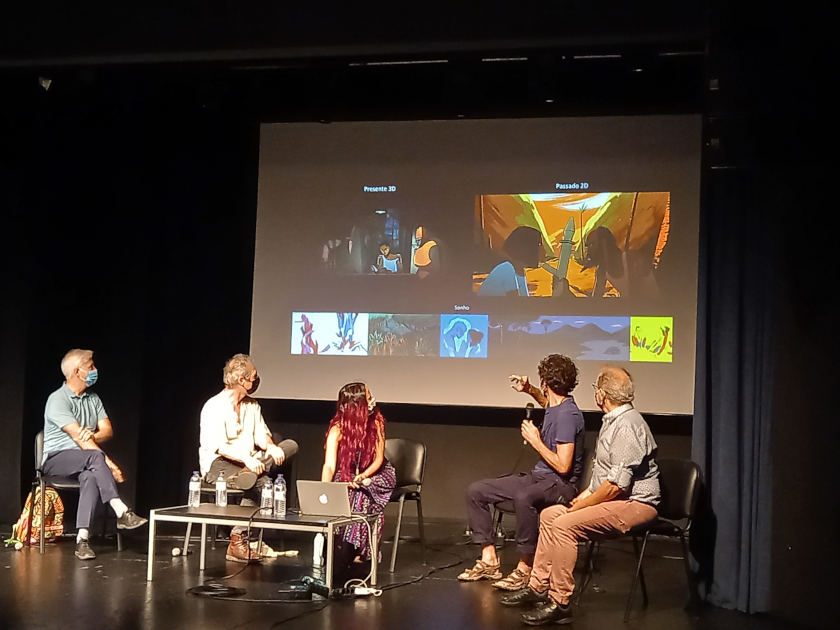 It was understandably the longest and most detailed presentation, which showed the final characters design, the research carried out in Angola, and the participation of Angolan artists and musicians. The film narrates of a historical and cultural issue. It tells the story of three women generations from the same family, marred by Angola's war - a country that historically is a former Portuguese colony.

Very beautiful, emotional, and well structured, this production uses 3D animation with 2D aesthetics - José Miguel gave up working with stop motion because he needed "micro-movements", which is impossible to do in real 3D. Still, he used the loose cartoon aesthetics for the most dreamlike, fantastic, and souvenir sequences in the story. Its current budget is 3.2 million Euros, but it will definitely be expanded, with the entry of more co-producers - from France, Belgium, and the Netherlands. It is undoubtedly one of the greatest animation feature projects to expect in 2022. 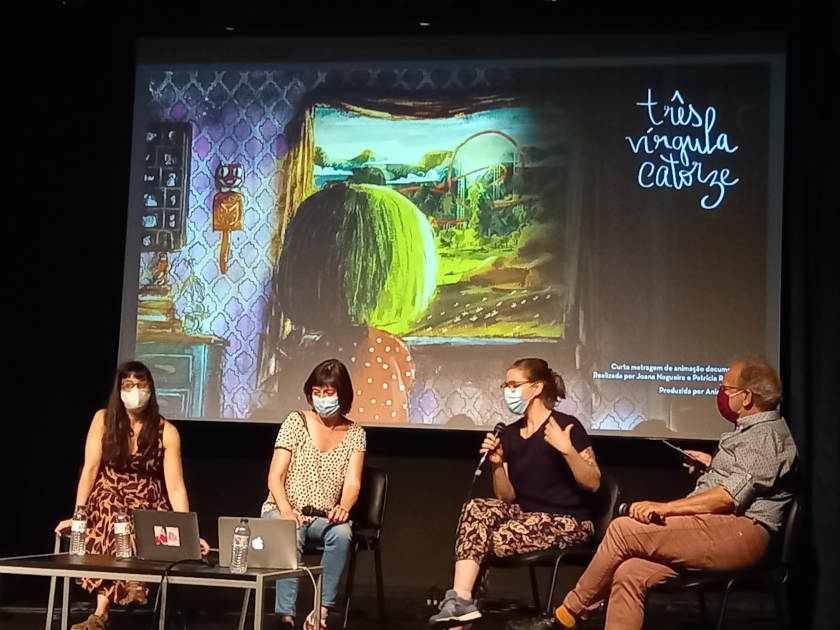 Soup and Three Comma Fourteen caught my attention the most, as they dealt with more sensitive topics. The first talks about domestic violence. And the second is "an inner journey about the condition of children diagnosed with ADHD (Attention Deficit and Hyperactivity Disorder); those have to deal with the conflict between, what is expected of them, their view of the world, and their behavior towards it”. It presents itself as a short documentary. 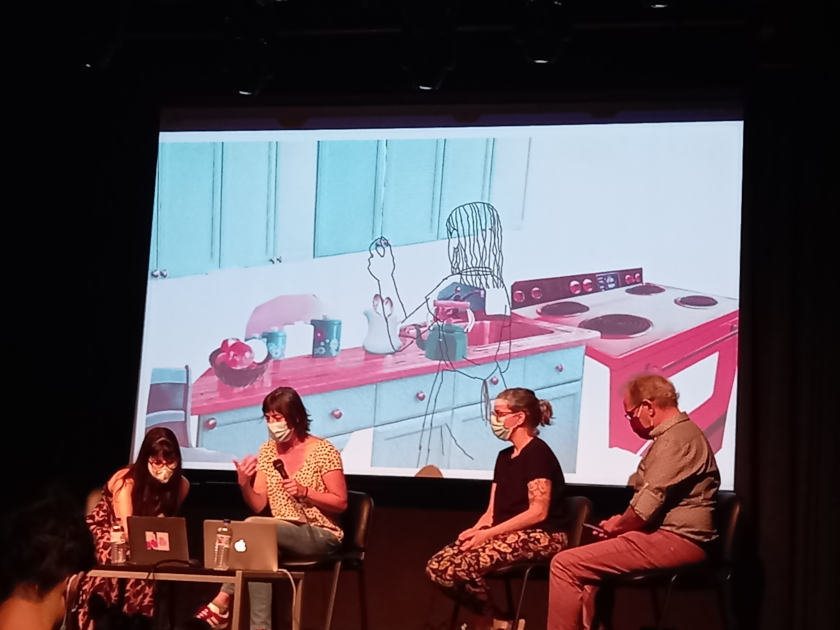 From the small sequence in progress shown during the Monstra event, I am not able to fully understand the final aesthetics, despite the studies of colors and scenery showed. However, it seems very interesting and stimulating; I liked the context of the double characters, from within come out “the childlike spirits” (if I may call it that), and shake themselves, despite their bodies still sitting in their classroom chairs.

For sure, the work of David Doutel and Vasco Sá is to be expected: its synopsis is “a young boy is payed to set a pine forest on fire”. However, during the presentation,my attention was caught because of its hard topic: talking about memory loss resulted from old age. The directors observed that they are still studying a defined aesthetic form, but it will be developed in an “analogical way” (by painting).

The last panel brought the producers Animanostra, COLA Animation, and Sardinha em Lata. In the first presentation, José Bandeira and Humberto Santana showed us a mini-series of two episodes (26 min.) for RTP (Portuguese public television) of André, a Rocha e a onda / André, the rock and the wave, by cartoonist José Bandeira. It tells the story of a family, whose father was a policeman in the Portuguese dictatorship. 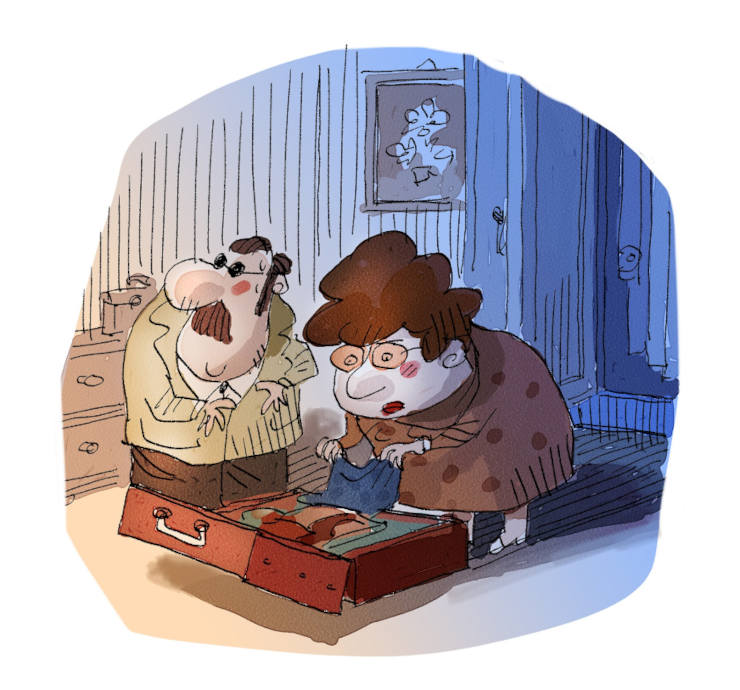 They lived the day of the dictatorship's fall (25 April 1974),and that changed their life forever.  When the policeman decides to escape, his wife refused to follow him,keeping their son. This animation talks about democracy, freedom, and repression, culminating today with the pandemic situation. The proposal for reflection on this theme caught my attention, with a very graphic aesthetic (newspaper comics), at a time when democratic values are in check all over the world. And as Humberto Santana said: “even today, it is a taboo to talk about dictatorship”. And nothing is more transgressive than animation to assume this role ;)

COLA was represented by the director of the 14-minute short film Ice Merchants, João Gonzalez. Sharing the animation work with Ala Nunu, the film is part of his Master's thesis at Royal College, and it is an intimate short film. It tells the story of a father and son, who both live isolated in a house on top of a mountain. Very colorful, and with a strong use of background music - João Gonzales is originally a musician - it seems to me to be one of those films that take you to a certain point and suddenly drop you over the precipice, creating a great impact. We need to wait and see.

The last presentation was made by producer Diogo Carvalho from Sardinha in Lata. He chose to present the production animated series projects: Diário de Alice / The Alice’s Diary (52 x 4'), Ema and Gui (52 x 7'), Perter Bern's (52x 13') and Saskatoons (52 x 11'), Os Bons Selvagens /The Good Wildlings (João Pais and Daniel Roque). The first is in co-production with Brazil (direction of Diego Viegas), with a childhood aesthetic (is even geared towards young children), whereas 'Alice' tells about various subjects according to her child's perspective. The story happens on the diary pages through simple drawings.

It is nice to note that all the films presented are supported or co-supported by the Portuguese funding body ICA (Institute of Cinema and Audiovisual). That reflects the importance of the Portuguese state's aid in promoting animation art. Here's a state which simply wants to support its cultural industry, without the latter becoming a political issue and a matter of discourse.

Another aspect that I'd like to highlight is the strong character of valuing the feminine factor, and issues usually left aside but now presented in these projects - mental degeneration, political repression, domestic violence. It is very helpful when an even non-perfect society (no society is ever perfect), allows this kind of reflection in its animation films. 2022 promises good animation screenings from Portugal!