The Breadwinner: Watch the Trailer

Watch the trailer for the new Cartoon Saloon (The Secret of Kells, Song of the Sea) feature animation The Breadwinner.

Cartoon Saloon, creators of the Academy Award®-nominated The Secret of Kells and Song of the Sea released the trailer for their third upcoming 2D feature.

The Breadwinner, based on Deborah Ellis' bestseller, tells the story of Parvana, a 12-year-old girl growing up under the Taliban in Afghanistan in 2001.

When her father is arrested, Parvana dresses as a boy in order to work and provide for her family. Together with her best friend Shauzia, she risks discovery to try to find out if her father is still alive.

The trailer opts for a laidback and very warm color palette of the Afghan country -to set the contrast with its subject matter. (But some storytelling /dreamy sequences are vibrantly drawn).

Overall, the trailer goes for individual determination in the face of verious serious socio-political obstacles.

2D animation has done that successfully before with the black-and-white Persepolis. Although set in a different country and era, The Breadwinner it's inevitable that The Breadwinner be compared to the previous film for its own version of female courage and stamina.

The Breadwinner is being directed by Nora Twomey (of Song of the Sea), and is a co-production between Aircraft Pictures Canada, Melusine Productions Luxembourg and Cartoon Saloon. The screenplay is written by Anita Doron and Deborah Ellis. Tomm Moore (who directed the previous two Cartoon Saloon films), now acts as the film's co-producer, along with Anthony Leo, Andrew Rosen and Paul Young.

Angelina Jolie acts as executive producer ("Director Nora Twomey and her team have breathed life into the characters and paid respect to the subject matter and to a country where women often struggle.”) 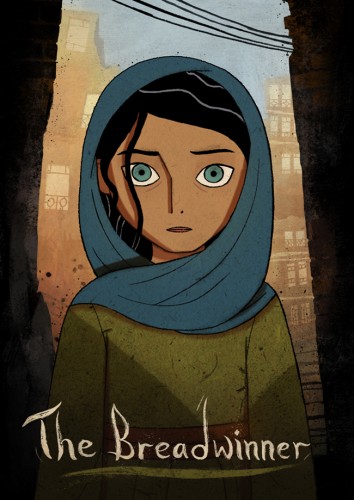